Top 10 Trends in Ending Hunger and Poverty in 2012 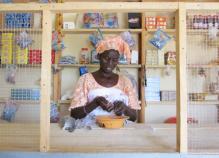 This year saw a continuation and expansion of many of the positive trends in last year’s list: civil society consultation, gender mainstreaming, transparency, small farmer empowerment. And it saw new initiatives to fill gaps in achieving the MDGs. Yet we also witnessed push back: organized threats to women’s human rights and civil society that remind us we can never take progress for granted. Let’s take a look at the top 10 trends in ending hunger and poverty this year:

See the rest on our blog!