The Hunger Project-India Mobilizes Communities to End Violence Against Women 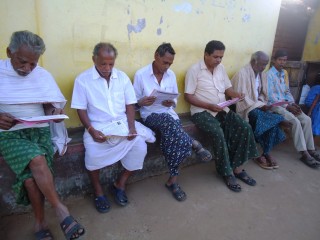 Now in its third year, the campaign provided a needed avenue to address gender violence: incidents of harassment, violence and discrimination against women and young girls, rapes, unwed teenage pregnancies, trafficking and sex-selective abortions are on the rise across some states—including Odisha. In the context of recent political developments and subsequent advocacy undertaken by elected women representatives — including demands for good governance, inclusive development and social and gender justice — the Violence Against Women campaign was an opportunity to challenge the social and political structures that allow gender-based violence to continue with impunity, and to advocate for new or improved legislation and policies. Mass awareness was created through numerous activities including the development and dissemination of information, education and communication materials; discussions and dialogues on various laws; speeches; mobile van campaigns; and radio jingles. At the end of the campaign, district-level consultations with prominent government representatives pledged their support to stopping violence against women. The Violence Against Women campaign had significant impacts including:

Demand for effective implementation of policies raised by elected women representatives during the course of the campaign will feed into The Hunger Project’s larger advocacy initiatives that are aimed to address inequality and discrimination and protect women and girls against all forms of violence.