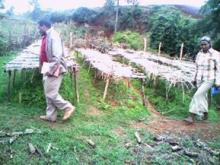 The Hunger Project-Ethiopia‘s fourth epicenter, Machakel Epicenter is located at the northern part of the country, 365 kilometers from the capital city Addis Ababa. The epicenter area covers three villages and is situated in a mid-altitude, high rainfall, agro-ecological zone. The majority of the soil in the area is red in color and the slope observed is hilly to gentle.

Before the Hunger Project-Ethiopia began working in the area, local water and soil were in poor condition. The overall characteristics of the area, in addition to the water runoff in the rainy season, led to extreme soil degradation. A vast amount of soil washed out from cultivable lands due to a poor water drainage system. Even though this problem was common throughout the Machakel Epicenter area, it was most severe in one particular epicenter sub-village named Gbsima (located in the project village Tessas Dar).

A large gully was formed by water runoff beneath this sub-village and became a threat for over 25 households. The gully, at a depth of 15 meters, was a threat to household livelihood but also overall socioeconomic progress in the sub-village. The gully was a safety issue as well: one life had been lost, four people had been injured and over 20 cattle were killed or injured after falling into the gully gorge.

The village’s Development Agent in collaboration with District Agriculture Office experts assisted the community in developing a proposal to address the safety issues of the gully. The Hunger Project-Ethiopia supplied materials, the District Agricultural Office offered technical support, training and coaching, and farmers contributed their labor to fixing the problem.

Together, these partners: established a forest seedling nursery site and operation, supplied woodpole fences and fence work, prepared the seedling planting holes and ongoingly manage the plantation. This joint venture of three parties, particularly the farmers’ dedication to the project, became an exemplary solution to the local problem.