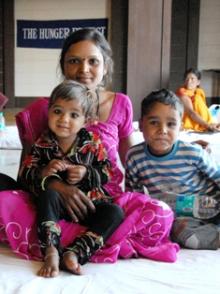 At a time when The Hunger Project has empowered more than 80,000 elected women representatives in India to be effective change agents in their villages, ambitious women’s voices in the states of Rajasthan and Odisha are still being silenced by the Two-Child Norm policy.

Intended to demonstrate the seriousness of the Indian government’s attempt to stabilize population, the Two-Child Norm prohibits the participation of any aspiring panchayati raj (village council) representative that has more than two living children. As a result, the Two-Child Norm restricts women’s political participation, hampers the growth of female political leadership, and further marginalizes communities that had been given priority in the 73rd Amendment to the Indian Constitution which established a quota of 1/3 seats reserved for elected women representatives.

The Hunger Project-India has recognized the social and political implications of this inherently discriminatory policy, often resulting in child abandonment, divorce, female foeticide, and exacerbated violence against women. In practice, the law disproportionately affects women (men often disown ‘unwanted’ children or abandon their wives) and marginalized classes. We are therefore advocating for its removal due to its unconstitutionality and infringement on the right to equal political participation by women and marginalized classes. To do so, we have established an ongoing, parallel advocacy approach on two fronts, both on a state level and nationally.

The Hunger Project-India, along with like-minded organizations, faciliated the formation of the Coalition Against Two-Child Norm and Coercive Population Policies (The Coalition) in 2011. Recognizing the broad implications for women and marginalized classes nationwide as a result of this policy, The Coalition enables larger visibility at the national level, enlarging the discussion and raising awareness among diverse, multisectoral actors. Engaged members include health experts, legal professionals, and human rights specialists, uniting many platforms under the single cause to eradicate coercive, discriminatory population policies.

State-Level Action: Outreach and Advocacy in Rajasthan, Odisha and Bihar

In both the states of Rajasthan and Odisha, there has been a marked decline in the Child Sex Ratio (CSR), as patriarchal societies favor the birth of male children. With increased access to technologically-advanced sonograms, couples are able to employ sex-selective abortions, resulting in fewer girl children being born and aging past adolescence. According to the 2011 census, the CSR of Odisha was 914 girl children to every 1,000 boys. Furthermore, both Odisha and Rajasthan employ a cutoff date of 1995 for the policy, meaning that any family with more than two children born after 1995 is ineligible for office. This disenfranchises young politicians, preventing the engagement of the next generation of female leadership. Unfortunately, political will to remove the Two-Child Norm is absent in both states, as ministers refuse to engage in the dialogue.

After a large advocacy and outreach campaign in the state of Bihar, The Hunger Project-India has observed the benefits of our persistent action on state levels. Having referenced the persistence of our approach in sending postcards from 12 districts and over 3,800 elected women representatives and community members, the Panchayati Raj Minister categorically declared that there is no intention of implementing the Two-Child Norm policy throughout the state of Bihar. Responding directly to the outreach conducted by The Hunger Project and partners, state government is now accountable to their commitment to end the discriminatory policy, encouraging diverse representatives of all income levels and backgrounds.

The Hunger Project-India is committed to strengthening elected women leaders in India. Policies such as the Two-Child Norm are unconstitutional and disenfranchise marginalized classes and women. Our active and persistent national advocacy programming work to prevent such discrimination, and build the enabling environment for increased women leadership in Indian society.