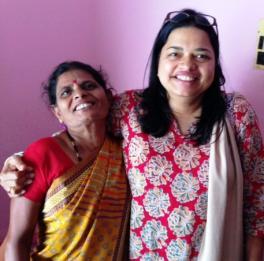 In 2000, The Hunger Project’s Annual Fall Gala launched a formal prioritization of Elected Women Representatives in India. That evening, we were honored to hear from one such empowered leader named Mudderakka who amazed all in attendance with her story of strength and resourcefulness (see video of her speech below).

Mudderakka (pictured, left), who spoke with four other empowered women that evening, was a participant in The Hunger Project-India’s very first Women’s Leadership Workshop and pledged to commit her life to improving the lives of those around her.

Thirteen years later, Hunger Project staff member Supriya Banavalikar, who translated for Mudderakka that evening, reunites with Mudderakka and shares this beautiful account of their meeting.

Just got back to my hotel after 14 hours of travel and spending time with Mudderakka, her two daughters and several panchayat members – past and present.

It was like the last 13 years melted away when I saw her racing up her narrow lane to greet me – and it was a wonder when I did not go crashing down by the force of this tiny dynamo.

Not only did she cook up a storm and was all set to feed me enough to make up for not seeing her for so long, but she also hosted 12 people – fellow panchayat women leaders and the staff of ASEDA our NGO partner in Karnataka.

Her spirit shines even brighter – her commitment to her people is stronger than ever – and as we spent the next four hours together I watched her awaken that same spirit in others. She told them that it was important for the process of women’s empowerment to be strengthened and urged them to step up their game and never give up.

She pulled out her big photo album from her time with us in New York and regaled everyone with stories of meeting investors, her plane journey and her speech that night.

She told her guests, “The Hunger Project changed my life – see my children are educated – my oldest daughter is a teacher in a high school and studying for a MA BEd degree. My son and younger daughter have completed schooling past 12th grade. I kept my promise that I would not get my girls married until they were ready.” Her younger daughter is getting married on November 27th to a farmer – and she is 26.

I so wished you all had been with us. Investment and the role the investors have played in their lives is very present for all of them. Several women were very emotional when they said – “I would never have experienced all that I have without The Hunger Project. We are eternally grateful.”

As I absorb all that I heard, I will share more. Stayed tuned to meet Mudderakka 2.0.

Watch Mudderakka at the 2000 Fall Event: