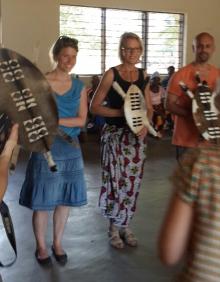 Global Vice President and former Country Director of The Hunger Project-Malawi, Rowlands Kaotcha reported that the PostCode Lottery team visited community partners’ households that are participating in the Microfinance Program. These Hunger Project partners were able to show PostCode Lottery their renovated homes with furniture and explain their investments in food production and security, including the purchase of their livestock.

Community partners also explained how their children were being sent to school with no problems, they have expanded their businesses and have created household savings through the Savings and Credit Cooperative (SACCO) at the epicenter, as well as the commercial bank.

A video crew joined the PostCode Lottery team of four to collect footage for a documentary. According to Rowlands Kaotcha, one of the team members from PostCode Lottery shared that the Epicenter Strategy is an excellent way to end hunger and poverty because it empowers people and The Hunger Project does not give our community partners handouts. In their own words they said, “we will now be ambassadors of The Hunger Project.”