This #GivingTuesday, we’re asking you to pick a story below that most resonates with you, share it on Facebook and tag a friend asking them to share that story of empowerment.

1. Pick the partner story or quote that resonates with you the most

2. Give now in honor of that partner’s work to change lives 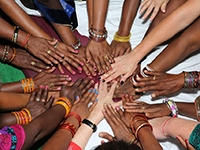 “We were never consulted in important matters of the Panchayat [village council]. Panchayat meetings were not even taking place. Now, when all four of us get together in our capacity as Elected Women Representatives and go to the Panchayat demanding for meetings to be held, the male Sarpanch and Gram Sevak are left with no option but to conduct such meetings. This also demonstrates the need for women leaders to unite, cooperate and support each other in a patriarchal society like ours.”  Rekha – Ward Panch, Lunol Panchayat, Reodor block, Sirohi District, Rajasthan, India

Have you ever joined hands with other women to give yourselves a voice after being disregarded in a male-dominated culture? Invest in honor of Rekha, then share Rekha’s story on Facebook, and add the following text:

[tag friend], on this #GivingTuesday, I nominate you to support @HungerProject in their work to empower the women electorate in India. Rekha, and women like her, are uniting as leaders to better their community. [Tagged friend], share this story, give now to empower women and pass on the empowerment! 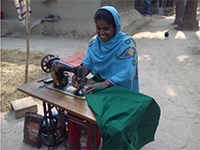 After being denied a complete education because she was forced to marry at 14, Razia Sultana, from Bangladesh, now serves as both a model of self-reliance and an advocate for the education of girls and children in her community. Razia changed her life through The Hunger Project’s Women Leader course, became a businesswoman and now hosts community meetings on nutrition, income-generating activities, early marriage and other important topics in an effort to empower all women in her community to become self-reliant.

How are you working to empower women and encourage self-reliance? Invest in honor of Razia, then share Razia’s story on Facebook, and add the following text:

[tag friend], on this #GivingTuesday, I nominate you to support @HungerProject in their work to empower women to become self-reliant. Razia, and women like her, are becoming strong empowered leaders and working to make future generations of women strong and independent. [Tagged friend], share this story, give now to empower women and pass on the empowerment! 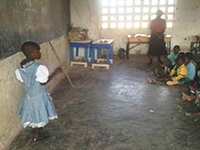 Eunice Watsaliranji, at just 8 years old, was surpassing her classmates in primary school because of access to early education. She is now a shining star. After graduating from Champiti Nursery School in Malawi, Eunice excelled in grade one. She was given a passage from a grade eight Chichewa textbook which she read without any difficulties, and even started getting up in front of class and teaching her classmates in reading. Eunice proves that access to early education is critical to child development and future learning.

How has early education impacted your life? Your children’s lives? Invest in honor of Eunice, then share Eunice’s story on Facebook, and add the following text:

There are many more partners with inspiring stories! View them here, and pick one to share!

Thank you for sharing our partners’ stories and giving to support our work to empower people to lead lives of self-reliance and dignity.