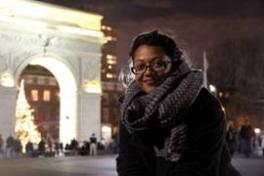 One third of the population in Bangladesh is less than twenty years old. The Hunger Project-Bangladesh is proud to work with this sizable, empowered force for community change. Activists like Poroma Kanya (pictured) engage with Youth Ending Hunger (YEH), the youth empowerment arm of THP-Bangladesh, which has become the largest youth-based volunteer organization in the country.

In January 2014, Poroma visited The Hunger Project Global Office in New York City to present on a new initiative called the Active Citizens program that she founded with THP-Bangladesh and Youth Ending Hunger. She began organizing the program in partnership with the British Council and other influential organizations in 2009 and is proud of the accomplishments of this relatively young initiative.

The principles of the workshops and trainings include neutrality, inclusivity, gender equality, democratic governance and youth/child leadership. So far, over 150 young people have engaged with the Active Citizens program in Bangladesh, partnering with such groups as THP-Bangladesh, BRAC, UNDP, British Council and Save the Children.