Chronic vs Emergency Hunger: Discussing Drought in Horn of Africa 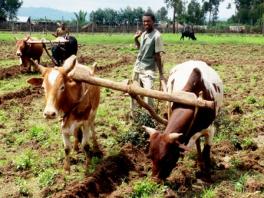 The worst drought in six decades is ravaging East Africa and the Horn of Africa, a region including the countries of Eritrea, Djibouti, Ethiopia and Somalia and affecting areas of Kenya and Uganda. The drought has endangered millions with a severe food crisis and, along with the current spiking food prices, has resulted in acute malnutrition in an alarming 35 percent – 40 percent of children under five. Displaced Somalian refugees number at least 15,000 every month, arriving in Kenya and Ethiopia and putting additional pressure on already strained refugee settlements and other resources.

Despite the severity of the crisis and the obvious need for action, we urge you to keep in mind that, as we hone in on the drought and its consequences, the on-going struggle of chronic hunger faced by many developing nations remains constant and often under-addressed. Emergency hunger, such as that the drought has induced, is serious yet accounts for less than 10 percent of global hunger; chronic hunger on the other hand, affects nearly one billion people continuously. Of course these categories are invariably linked and, as highlighted in a recent World Food Programme report, overlap in that “many people already on the edge find their ability to cope compromised by small shocks and can become chronically food insecure. Conversely, chronic food insecurity is often the result of repeated shocks such as recurrent droughts,” of which the Horn of Africa serves as a perfect example, not yet recovering from the last severe drought in 2009.

Distinguishing the differences between these categories of hunger – emergency and chronic – and shining a balanced spotlight on both, will help determine the most appropriate aid and humanitarian responses required to effectively tackle the global issue of hunger. A case in point is Ethiopia, in which, according to one BBC article, “even in a year of good weather conditions, Ethiopia still needs food assistance over and above the [existing] safety net scheme.” It is evident that attention to, but also above and beyond, the drought crisis and other emergency situations will be necessary in facing the condition of hunger in its totality. A true analysis of underlying causes of chronic hunger and vulnerability of certain communities to emergency situations is the first step in ensuring sustainable and self-driven solutions to food insecurity.

The Hunger Project stands in solidarity with all those currently in need and suffering from the drought in the Horn of Africa and other affected areas. We especially applaud the power of grassroots individuals who are working to assist and empower their communities in the face of crisis. We would also like to express our appreciation for our staff in Ethiopia and Uganda, for their continuous work in the region and in dealing with the current challenging circumstances. It is imperative to remember that along with focusing on the crisis situation and the relief that is necessary, we must also strive to empower rural communities in strengthening their self-reliance, and therefore their ability to counter emergencies such as these in the future. In receiving training and tools for creating and managing food banks, developing income-generating-activities and other means of sustainable self-reliance, vulnerable communities can bolster their own chances against crisis conditions and increase their well-being in general after the end of the crisis.

In the words of Fatuma Abdikadir, community development coordinator for the Arid lands Resource Management project – an office under Kenya’s Office of the President, we must take care not to “rush in [to help], and the minute it starts raining…just walk away.”