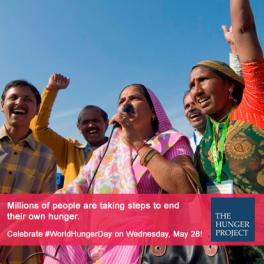 Join The Hunger Project family in celebrating our fourth annual World Hunger Day on Wednesday, May 28, 2014!

World Hunger Day, launched by The Hunger Project-UK in 2011, aims to inspire people all over the world to show their solidarity and support for the women, men and children that are ending their own hunger and poverty and making their journey toward self-reliance.

Though we may hear about it most often in the news, hunger as a result of famine or emergencies is not the only type of hunger in the world.

The vast majority of those living in hunger– 842 million people or one in eight of our global human family– live in a condition in which day in, day out, they do not have sufficient nutritious food to lead healthy lives.

Hunger and malnutrition are the number one risk to health worldwide — greater than AIDS, malaria and tuberculosis combined.

Chronic hunger persists when people lack the opportunity to earn enough income, to be educated and gain skills, to meet basic health needs and to have a voice in the decisions that affect their community. World Hunger Day is about raising awareness of chronic hunger and about celebrating the achievements of millions of people who are already taking actions to end their own hunger.

The Hunger Project works in partnership with people in Africa, South Asia and Latin America to develop effective bottom-up strategies. We have discovered three critical elements that, when combined, empower people to make sustainable progress in overcoming hunger and poverty:

The Hunger Project’s approach builds on our most important resource: the creativity and self-reliance of people living in conditions of hunger and poverty themselves, and empowers them in being the agents of their own development.

We hope that World Hunger Day will encourage even more people and organizations to work in collaboration with one another and with all of our partners who seek to bring about a sustainable end to their own hunger and poverty. Get involved now: Invest in The Hunger Project.