Building Participatory Democracy from the Bottom Up in Rural Bangladesh 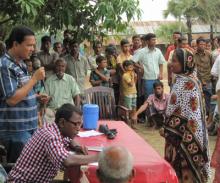 In May 2013, The Hunger Project-Bangladesh launched a two-year project, supported by the United Nations Democracy Fund (UNDEF), entitled “MDG Unions: Building Participatory Democracy from the Bottom Up in Rural Bangladesh.”

This project will build on recent legal reforms to demonstrate that improving governance at the local government level (the Union Parishad, or UP) by building the capacity of the UP and uniting it with an active, mobilized citizenry, particularly through implementation of the village assembly (Ward Shava), can accelerate progress for social and economic development.

The objective is to build the capacity of both the elected local government bodies (UPs) and grassroots civil society to work together to achieve the Millennium Development Goals (MDGs). The expected outcomes are:

The strategy is to create 10 MDG Unions across two districts through intensive capacity building and mobilization, ensuring that each Union properly implements four key provisions of the Local Government (Union Parishad) Act, 2009:

The outcomes of this process and the action campaigns it generates will be reported to the media and to national policymakers, encouraging them to ensure proper implementation of these reforms nationwide.

Learn more about our work in Bangladesh.