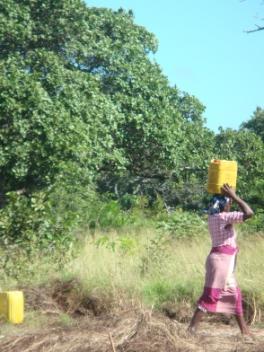 Water is the elixir of life on Earth. We need water in every aspect of our survival, from raising crops and livestock, to cleaning ourselves, to drinking for hydration. About 70 percent of the world is covered by water. Which sounds like a lot of water for us, right? The problem is that only 2.5 percent of the world’s water is safe to use. And even less of that 2.5 percent is water that we can access immediately that is not locked up in glaciers or ice caps.

As the world population increases and water contamination gets worse, clean drinking water is becoming a major problem. Many parts of the world, particularly in Africa, are beginning to face what USAID calls an “unprecedented crisis in water,” which affects a number of issues crucial to survival, such as food security and health. Approximately one out of every six people in the world lack access to clean water; by 2025, the number of people without water is expected to double. Women and girls in poverty bear the brunt of the water burden, as they transport water from source to home, often at great distance and personal cost to their safety.

The international community has taken note of these struggles and begun to take significant steps in the fight for water. The BBC recently highlighted the use of a surprisingly old technique to clear contaminated water and make potable water accessible and affordable for poorer communities – sand. According to the article, people have used sand to help filter water since ancient times. Though using regular sand to purify water can be difficult and time consuming, scientists have found that coating sand with graphite – common pencil lead – is an effective water filtering technique. Coated sand has proven to be affordable and easy in making clean, safe, life-giving water available in poorer communities.

Providing poorer, rural communities with safe, affordable water is something the international development community has struggled with for some time. Various methods have called on all key players – non-governmental organizations (NGOs), governments and even large corporations – to improve water supplies. One NGO trains people in Latin America at the grassroots level to create ceramic pots that filter water. Other companies have developed low-cost, miniature filtration devices, created by global firms like Tata in India, to be sold to those in need of clean water. Among other projects to improve accessible drinking water, we at The Hunger Project have employed the use of tippy-taps to improve health and sanitation in rural African villages.

What other cost-efficient methods are out there to clean contaminated water? Do you know of other initiatives out there that are working on bringing these technologies to the poorest of the poor?