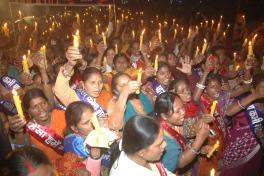 As Human Rights Day comes to a close, it also concludes the nation wide initiative known as 16 Days of Activism Against Gender-Based Violence. Our colleagues in India bring us this report of their 16 Days activities:

This is the 20th anniversary of the passing of the 73rd Constitutional Amendment and subsequent entry of women in the political space in India. However, women’s participation in politics has not been without challenges. Because they defy the status quo that perpetuates gender discrimination, the elected women leaders face severe backlash and violence against them.

Recognizing the different dimensions of violence against women (VAW) and the broader context in which it manifests itself, The Hunger Project’s efforts have been to strengthen women’s leadership by reinforcing the understanding of patriarchy and power, of principles of good governance such as accountability, inclusion and transparency and the formation of support structures (like the EWR federation and Jagruk Manchs ). Each strategy is designed to build the capacities of an elected woman representative and empower them to be effective leaders. THPs strategies are also aimed at facilitating those processes that respond to issues of VAW in Panchayats.

In 2012, 16 Days of Activism Against Gender-Based Violence, spearheaded by Elected Women Representatives (EWRs), was successfully undertaken in the seven states that The Hunger Project-India currently works in. With the objective of escalating and amplifying the voices of women against violence, the campaign was ably led by EWRs in their respective constituencies in all of the states.

In 2013, The Hunger Project-India undertook a 16 Days Campaign in the states of Bihar, Odisha, Karnataka and Tamil Nadu. High incidences of violence against women are found in these states in a variety of forms.

Building on previous year’s campaign carried out in the seven states and keeping in mind their current socio- political context and the way VAW manifests itself, campaign activities, with key messages will be developed to generate mass awareness amongst men and women.

In the context of recent political developments and subsequent advocacy undertaken by EWRs during their five year cycle including demands for good governance, inclusive development, social and gender justice- with renewed focus of EWRs on this issue, the 16 Days campaign on VAW is an opportunity to challenge the social and political structures that allow gender-based violence to continue with impunity and to advocate for new or improved legislation and policies. The campaign seeks to address the one of the biggest impediments to addressing VAW. Namely a severe lack of effective implementation of existing policies. Mass awareness through development and dissemination of IEC material, discussions and dialogues on various laws, schemes, mobile van campaigns, radio jingles, district level convention, film screenings, interface with the media, will be an important component of the 16 Days of Activism. This educates the EWRs, community members (including men, women and youth) to access and utilize those schemes aimed at addressing VAW. Key messages of the campaign will be arrived upon by EWRs, federation and local partners alike, so as to establish the identity of the campaign by grounding it in the local context in which VAW manifests it in the four states, respectively.

The campaign launched November 25, 2013 with press conferences being organized at district and state level to highlight the most pertinent issues concerning VAW (in the context of the state) perpetuated in public and private domain. Media reports on VAW, especially violence against EWRs at the Gram Panchayat level while exercising their political role is not given much importance. Through the interaction of EWRs, members of the press will be able to document and highlight the various hurdles and challenges faced in tackling different forms of VAW. Most importantly, the activity aims to bring attention of relevant stakeholders and to build a deeper understanding on the complexity of the issue in hand.

To celebrate International Human Rights Day, in Odisha District level conventions were organized where the EWRs will apprise the government of the existing situation of VAW at district level and urge the state machinery to take positive steps to mitigate the same; In Tamil Nadu public meetings, along with poster exhibitions on the different manifestations of VAW were organized. In all the states, signature campaigns — village level meetings and marches led by EWRs — will generate significant awareness on issues of VAW and galvanize local action on the issue.

Demand for effective implementation of policies raised by EWRs during the course of the campaign will feed into THPs larger advocacy initiatives that are aimed to address defacto inequality and discrimination and to prevent and protect women and girls against all forms of violence.