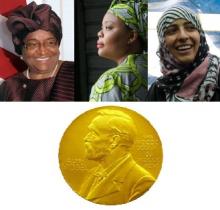 On Friday, October 7, 2011 past Hunger Project Africa Prize laureate Liberian President Ellen Johnson Sirleaf, as well as Liberian peace activist Leymah Gbowee and Yemeni pro-democracy campaigner Tawakkul Karman were awarded the 2011 Nobel Peace Prize. As noted by the New York Times, they are the first women to win the prize since Wangari Maathai of Kenya won in 2004.

In 2006, development expert and former head of UNDP’s Africa Bureau, President Sirleaf was awarded The Hunger Project’s Africa Prize for the Sustainable End of Hunger for her commitment to the empowerment of women. President Sirleaf campaigned in 2006 with hopes that her election to the office of President would encourage women across Africa to seek high political office. Since her election, President Sirleaf has appointed women into high-ranking positions and into the top bracket of ministers, including the first female head of police and the first woman Justice Minister and Attorney General. In addition to the political empowerment of women, President Sirleaf is credited with rebuilding Liberia after 14 years of devastating civil war and emphasizing the necessity of gender equality in the process. She insists that “the education of girls is to become a cornerstone of development in Liberia.”

Fellow Liberian, Leymah Gbowee, is a long-time supporter of President Sirleaf and her peace activism is credited with helping to elect the President into office. In addition to organizing wide-reaching, women-led, interfaith peace protests, Leymah Gbowee is a trained trauma counselor and has worked extensively with ex-child soldiers in her country.

The final recipient of the 2011 Nobel Peace prize is a Yemeni politician and human rights activist who leads the group Women Journalists Without Chains. Tawakkul Karman regularly leads peace protests and sit-ins in support of free-speech and women’s empowerment in both public and private sectors.

All three women received the 2011 Nobel Peace Prize for their “non-violent struggle for the safety of women and for women’s rights to full participation in peace-building work.”

A huge congratulations from us at The Hunger Project to President Sirleaf, Leymah Gobwee and Tawakkul Karman.