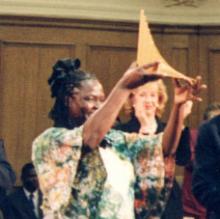 Professor Wangari Muta Maathai, Nobel Peace Laureate and founder of the Green Belt Movement, passed away on September 26, 2011 in Nairobi, Kenya after a courageous struggle with cancer. All of us in The Hunger Project family deeply mourn her loss. She received the Africa Prize for Leadership for the Sustainable End of Hunger in 1991, and had been a great friend to The Hunger Project.

Professor Maathai won the Africa Prize award in 1991 for founding the Green Belt Movement, one of the world’s most successful programs to combine community development with environmental protection. Since 1977, the Green Belt Movement has mobilized hundreds of thousands of women and men to plant more than 47 million trees, restoring degraded environments and improving the quality of life for people in poverty. Throughout her career, she was a visionary leader and a brave advocate for sustainability, equity and justice. In 2004, Professor Maathai was awarded the Nobel Peace Prize in recognition of her work for sustainable development, democracy, and peace — the first African woman and the first environmentalist to receive this honor.

Professor Maathai touched so many lives and her passing is a great loss for all of humanity. She is survived by her three children—Waweru, Wanjira, and Muta, and her granddaughter, Ruth Wangari.