Youth Leader in Bangladesh Starts a Literacy Center in His Community 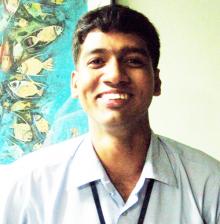 A.K. Manik is 21 years old and grew up in Raghobpur village in Mymensingh, Bangladesh with six brothers and two sisters. Manik first became involved with The Hunger Project (THP) in 2003 when he participated in a three-hour Youth Ending Hunger (YEH) workshop that he heard about through his high school.

He was inspired to take a four-day Youth Leadership Training, where he began to realize that he could make a difference in his society. Manik describes the impact the gender equality component of the training had on his attitude toward women: “In Bangladesh, we don’t recognize the contribution of women to society, but we should. They work more than men, and they sacrifice themselves for us. Before, I didn’t see women as equal, or realize how important it is to recognize their rights.”

Manik formed a YEH unit in his village. He mobilized about 20 youth with skills he had gained in the leadership training. The process gave him confidence as he saw that he was able to motivate others. For young people in Bangladesh, libraries are few and far between, and almost non-existent in rural areas, so Manik’s first initiative was to establish a library in his village. Manik and his team collected over 500 books from community elders and personal donations, rugs, a table and 12 chairs to furnish an abandoned room in a disused military shelter. Today, the library is actively used by community members, including students, who even make the journey from distant villages to use the library. Manik is immensely proud of this.

Manik’s next step was to start a literacy movement in Raghobpur. He converted the library into a literacy center, where YEH volunteers took turns each day to teach basic literacy and numeracy to 25 participants over three-month periods. Upon completion of the course, previously illiterate villagers were able to write their name and address, read newspaper headlines and compose short letters.

Manik says there are now over 100 such literacy programs taking place in Raghobpur. The library also serves as a base for other YEH educational programs, such as an English Club, where students meet to practice their conversation skills. Manik also wants to build computer literacy: “We hope in time to get a computer so that our students have the chance to learn computer skills and connect with the world through the internet.”

Manik says that the awareness-building activities he has led as a YEH activist have had a tremendous impact on his village. Manik and his YEH team have conducted campaigns against dowry and early marriage, environmental issues and nutrition. During a recent nutrition campaign, Manik gathered community members in a public forum to identify nutrient rich foods, and taught them how to get the most nutritional benefit from these foods, such as by leaving fruits and vegetables unpeeled.

On a deeply personal level, Manik feels he has changed through his involvement with YEH and THP. “I’ve built up confidence that I can develop my own community by contributing my own self. This makes me a visionary. It has totally changed me – vividly! I wonder what would have happened to me if I hadn’t joined THP.” He points up to the sky, “I am up here. But if I hadn’t joined THP, I would be down there,” and points to the floor. “I have this feeling all the time: I will keep doing this work my whole life. And my future wife and child – they will do this work also!”