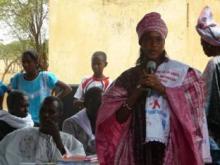 Mrs. Marième Harouna Ba, mother of two children, is an integral part of The Hunger Project (THP)-Senegal. She is President of the Board of Directors of CTG Namarel, a rural savings and credit group, has seven years of experience as a trainer in literacy (1993-2000) and 10 years of radio communication (2000-2010). For seven years, she was the main facilitator of the local radio before becoming head of the radio program (2003-2010). She has alternated between her work on the radio and as a literacy trainer.

Since 2008, Marième has been a trainer in THP’s Women’s Empowerment Program (WEP) and holds a weekly workshop in a remote village, despite the fact that it is difficult to access. She currenty teaches literacy, numeracy and language management in local Fulani for four different programs. At least 400 women were trained and assisted by Marième, in addition to a score of literacy trainers that she supervised.

Marième Harouna enjoys the epicenter’s offerings and her work as a well-known WEP animator, through which she helps women assert their rights. It is for this reason that, during a WEP workshop on the child’s right to education in an epicenter village, Marième’s moving speech prompted an elderly person to request that Marième take charge of her daughter. The child, from a remote village called Hamé, located 10 kilometers from Namarel, lived too far from any school. Since July 2008, the girl has been in Marième’s care, pursuing her schooling at Namarel. She is proudly the first girl from Hamé to have the privilege of attending school!

Since August 2010, Marième has been director of the community radio, where she has worked for 10 years. When the post became vacant, Marième knew that she could compete for the position against two men, despite the fact that the radio had never been led by a woman. Marième states that it was her experiences with THP-Senegal and the success that she has had in the past with listeners that motivated her to seek out the position. The radio’s Advisory Board announced Marième as director on August 13, 2010.