Widow Utilizes Microfinance Program to Care for Her Family 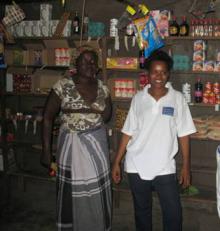 Messe Chauque is an African Woman Food Farmer Initiative (AWFFI) partner and chair of the Loan Committee at Chokwe Epicenter in Mozambique. She is 45 years old, a widow and a mother of three children. She joined The Hunger Project in 2006 as a member of the loan committee in her village (Djodjo). She was also a member of the epicenter construction committee. Later she was elected chair of the Epicenter Loan Committee.

At that time she was married and was a farmer and also running a small business. When her husband died, she faced a lot of problems and experienced many difficulties raising her children. She received Mt 4,000.00 as her first loan in 2007 and used this money to increase food production and improve her business. She made a profit and paid back her loan. At the end of 2007, she received another loan (Mt 7,000.00) to continue with her activities. She is very happy because she has enough money to raise her children, and send them to school outside the village (in Maputo and Manjangue town).

Learn more about our work in Mozambique.

Support The Hunger Project in training thousands of other women like Messe.