Ms. Mary Liwonde, a widow in Kantuwale, Malawi, first attended a Vision, Commitment and Action Workshop (VCAW) in her area in 2005, when The Hunger Project (THP)-Malawi was starting up an epicenter in nearby Ligowe.

The vision she conceived during the VCAW was of having the ability to cultivate enough food both for home consumption, and for selling to meet her home needs.

“I had nobody to help me” said Liwonde, “My son, who was my only hope, died when he had just finished secondary school, right when I thought he would be able to start helping me. I felt totally hopeless, but through the VCAW, I regained myself and decided to do something to change my life.” 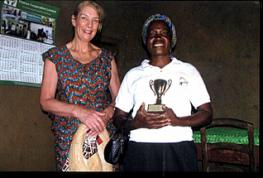 Mary enrolled in THP-Malawi’s farm input scheme in 2005 and took two bags of fertilizer and 10 kgs of hybrid maize seed on credit. She attended trainings on new farming technology at the epicenter. That year, she harvested 32 bags (50kg each) of maize, an increase from her normal harvest of six to ten 50-kg bags in the previous years on the same piece of land. She repeated the credit scheme in the next two years, and she has been selling the excess maize grain. She has now built her own house with corrugated iron sheets, and employs people to work for her in her garden.

Still, for Ms. Liwonde, perhaps the most memorable achievement thus far was being recognized by Monsanto as the second National Best Farmer of the Year in 2007, just two years after she first enrolled in THP-Malawi’s program. In addition to the recognition, she received a trophy and several prizes.

“A vehicle came right here to pick me up,” she remembers, “[and brought me] all the way to the capital city…I stayed in a room like I have never slept in before. The food we ate… everything that happened there…it was something I had never dreamed of. I now encourage people to remember that anything is possible. All you need is commitment to your vision”.