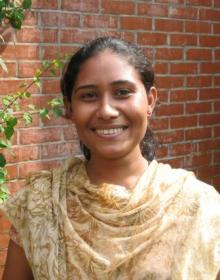 Meher Nazmun, known as Tisha to her friends, is 21 years old, and lives in Munshipara, Rangpur district in Bangladesh. She first became involved with The Hunger Project (THP)-Bangladesh in November 2008 after taking an animator training course. During the course, she came to the realization that for women to be truly empowered they must educate themselves and acquire economic self-reliance.

Tisha went on to participate in a Youth Ending Hunger (YEH) workshop, and shortly after joined a YEH unit at her college. She actively took part in YEH activities, but, as an unmarried woman, had to struggle for the freedom to do so.

She explains, “In Bangladesh, the situation is always more difficult for women than it is for men. We have to struggle hard just to to participate.” Tisha’s family movements outside the home were restricted by family and members of her local community.

Undeterred, Tisha found a position at a local radio station and recounts, “When I started earning my own money, I didn’t have to ask my family for permission for everything – it gave me more independence. People also started to recognize the benefit of my YEH activities on the community, and they stopped criticizing me so much.”

As she walked to and from her college, Tisha began to notice children from the nearby slum on the streets and not enrolled in school. With the help of her YEH unit, Tisha initiated a new community intervention. She started teaching these children in an open-air school that she called “School Under the Sky.” The children initially responded well and attended regularly, but, eventually, attendance dropped off. But Tisha and her YEH unit were not discouraged and decided to address this problem directly. They went into the slum to speak to the children’s parents about the importance of educating their children.

While there, Tisha observed the lack of sanitation and the generally poor health of families she was speaking to. She began organizing awareness campaigns on basic health care issues such as hand-washing before meals. In the process, Tisha was able to establish a strong relationship with the community members who came to trust her and respond to her outreach efforts.

Despite the community’s acceptance, Tisha still had difficulty retaining student attendance at her “School Under the Sky.” While primary education is technically free, many poverty-stricken families cannot afford the cost of school uniforms and books. She continued with her “School Under the Sky,” attempting to cut down on costs for students, but was often forced to close due to lack of attendance.

Tisha eventually organized an arts program for her students, and invited the principal of her college to attend. He was so moved by what he saw that he offered to provide Tisha with a permanent room in which to conduct her classes. He also offered to negotiate with the local government primary school so that her students could be re-enrolled in a formal education program.

Tisha’s plan for the future? To continue teaching children from the slums around her college and to initiate a similar program in her own village. For Tisha, taking the Youth Leadership Training gave her tools to address the hunger, poverty and inequality that she saw all around her. It also taught her strategies to enroll the support of her peers and community members in these efforts.

“Since becoming a youth leader, I have learnt a lot about life, a lot about social responsibility, and a lot about the importance of setting an example for others.” Tisha now leads YEH workshops to inspire youth in her community, and recently conducted her first Youth Leadership Training to develop the skills of other young leaders.