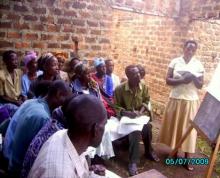 Edridah Tumushabe Warugaba is a 34-year-old wife, and mother of four children. She has been actively participating in The Hunger Project’s (THP’s) Microfinance Program (MFP) in Uganda for the last three years, by attending all the mobilization trainings offered at her local epicenter.

When the time came to form groups, she not only formed her own group of 15 women, but she also mobilized others in her community to create their own groups, allowing them to officially register with the local government for loan disbursements. Because of her active involvement in all the mobilization meetings and trainings, she was elected chairperson of the village loan committee in her parish. Later she became the chairperson of the entire epicenter loan committee.

Her first loan was for 200,000 USHS (US$102), and with this, she bought 50 birds for a small poultry project. After the chickens matured, she sold them and used the money to buy goats. She also had enough money left over to pay school fees for her children, and to pay back her loan 100 percent.

With the money she has earned thus far, Edridah has been able to educate her children and complete the construction of her house.

However, some of the most lasting benefits from her involvement with THP-Uganda’s MFP are less tangible: the mobilization skills, communication skills, and improved book-keeping skills that she will carry into the future.

She can now train partners in the Vision, Commitment and Action Workshop, book-keeping, bylaw formation, and project identification. Furthermore, Edridah now knows how to mobilize her community to achieve a 100-percent repayment record on their loans.

In the future, her dream is to become the Chairperson of the Board when their Rural Bank opens in Mbarara Epicenter.