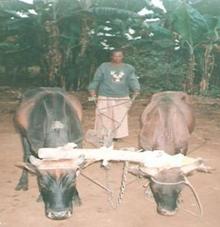 Mrs. Mukama Hajira of Nsale Village in Iganga Epicenter is a 43-year-old woman who owns a five-acre garden of cassava and maize. She also has an ox plow for working on her garden (photo to the left). She joined THP in 2003 after attending a VCAW in her village. This led her to mobilize a group of 11 women to start a Functional Adult Literacy (FAL) class. An Agriculture Extension Officer trained the class in life improvement as well as improved agricultural practices. It was at this time that Hajira got these skills in addition to her numeracy skills.

In 2003, her group, Nsale Atambula Women’s Group, to which she acted as Chairperson, joined the AWFFI program. She got a loan of 150,000 Ush (US$70) from THP, which she invested in a three-acre garden of maize. With additional income and appropriate training, she was able to expand on the acreage, as well as to diversify her economic activities by establishing a market stall. With this, she was able to provide scholastic materials for her four primary school-going children. With good profits from the projects, she paid back in time.

In 2004, she got another loan of 300,000 Ush (US$140) with which she bought a cow and increased the acreage of her garden to six acres. Though she had a piece of land before acquiring the loans, she had never utilized it fully due to lack of capital. With available capital she opened more land for agriculture and engaged in commercial activities. She paid the loan back in time and bought a second cow. The cows produce milk, which she sells. Her children are now in high school and are ably meeting their school requirements. Hajira now owns two goats, two cows and an ox plow, which is rented out to her neighbors at a fee.

With the inauguration of IFFI rural bank, Hajira bought 13 shares, making her one of the women with the highest number of shares. She is currently servicing a loan of 400,000 Ush (US$186), and has bought two more cows and roofed her house with iron sheets. She plans to expand her milk business as she increases savings for her children.

Hajira is currently a chairperson of the Village Loan Committee, and she is happy to be respected in her home and the community at large, since her decisions are impacting positively to achieve the end of hunger and poverty in her community.