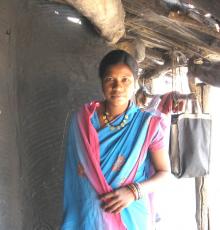 In 2007, when the seat in the ward was reserved for Scheduled Tribe (women), Dalimba Majhi aged 24, was asked by people in her area to contest, as she happened to be the most educated of women in their ward. A ninth-grade graduate and a first-time entrant, she was encouraged by her father-in-law, who saw this as an opportunity to do something worthwhile in their village. She contested against one other woman and won by a margin of 60 votes.

Soon after her electoral victory, Dalimba attended a Women’s Leadership Workshop (WLW) organized by The Hunger Project (THP) in Golamunda Block. Following the WLW, she shed her initial hesitation and her shyness evaporated.

In a short stint of two years, Dalimba has managed to get a road constructed under the centrally sponsored National Rural Employment Guarantee Scheme (NREGS), facilitated fourteen old age pensions and one Indira Awas Yojana (a government housing scheme) house for her ward. This is a commendable achievement for such a young woman. Golamunda block is known to be one of the most misruled blocks of Kalahandi district. Here, even male ward members find it difficult to get any work done due to continuous interference and harassment by unruly elements (contractors, corrupt officials) and do not attend Gram Panchayat meetings.

Apart from being a ward member, Dalimba is also an Asha worker (Accredited Social Health Activist) under Janani Suraksha Yojana [Women’s Protection Programme, National Rural Health Mission (NRHM)]. Until now, she has successfully motivated and assisted 20 mothers in safe delivery at the local hospital. Her readiness to assist any person in distress has endeared her to the villagers.

Coming from a community where female literacy is very low, Dalimba gives special emphasis to girl child education. When she came to know that many girls were dropping out of school after grade III, she went door to door urging the parents to let their girl children complete their primary school education, and to ensure they could at least read and write Oriya competently. Her campaign paid off and five girls, who had earlier dropped out of school, are now in grade VI. Dalimba further wants to improve the overall education facilities at Golamunda to ensure a better life for her own as well as all other children in the village.

Apart from her father-in-law, Dalimba’s husband gives her his complete support. The people in her ward are very happy with her work, and they cooperate fully with her. Her role as an Asha worker also entails visits to a wide variety of people in her ward, who now also come to her with their problems, in addition to her own constituents.

Nevertheless, Dalimba rues that a lot remains to be done.