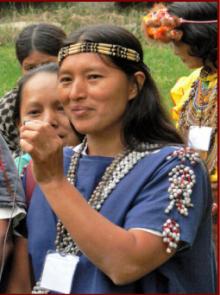 Profile of a Leader

Nelly is a traditional doctor. Thanks to her participation in the Indigenous Women’s Permanent Workshop trainings with Hunger Project partner organization Chirapaq, Nelly was able to recognize the value of her knowledge of the healing powers of nature, which is her heritage from Nomatisguenga ancestors. Nelly became known for her leadership through her participation in local and regional organizations, and by protecting and promoting traditional knowledge, indigenous rights and women’s issues through local civic organizations.

In 2004, Nelly was elected Municipal Agent in the Black River District and participates in the Group Work of Indigenous Peoples of the United Nations.

One of Nelly’s proudest accomplishments is that she was able to recover land that belonged to Ashinka ancestors but had been taken away from the community for commercial purposes. She achieved this because in the Permanent Workshop, she had learned the protections provided in international law under ILO Convention 169.

Learn more about work in Peru.

Support The Hunger Project in training thousands of other women like Nelly.