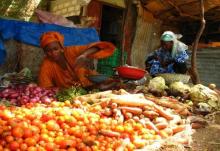 Madame Awa Ndiaye is 37 years old. She lives with her husband (a construction worker), his three daughters (thirteen, nine and three years) and her five-year-old son. Mrs. Ndiaye joined the The Hunger Project (THP’s) Microfinance Program (MFP) in Senegal in 2005, when she took out several loans to help undertake a fresh vegetable trade.

Initially, she received her supplies from the local tradesmen, who, because of the largely deteriorated state of the roads, monopolized this sector. However, after she received her third loan, of 150,000 FCFA (US$318), she felt empowered to arrange for herself and five other women to be supplied directly from Potou (a large market-gardening site located about 80 km from Coki). This way they could minimize their overhead expenses and become independent of the middlemen. This was the beginning of a new “career” for Awa and her colleagues.

Changes in her life

Today, Madam Ndiaye has received loans totaling more than 700.000 FCFA (US$1,482), and her trade is flourishing. She describes her partnership with THP-Senegal enthusiastically, while mentioning the substantial impacts it has had on both her business and her personal life:

Her goal in going forward with THP-Senegal’s MFP is to diversify her trade, by adding such products as fresh fish, and to grow her business in order to serve the villages surrounding Coki.

Photo: Full of energy and enterprising, Madame Ndiaye is now one of the major wholesalers of vegetables in her village. She supplies fresh produce to the majority of the women vegetable sellers in the Coki market.