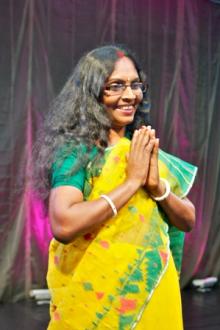 Gita Rani Bormon of the Jelkhali village in Satkhira, Bangladesh is known to all as a dedicated woman leader who is self-confident, self-reliant and self-motivated. She is committed to the social movement of halting violence against women and early marriage.

Gita was born in a lower, middle-class family in 1966. She studied up to Senior Secondary School (SSC) and, after completing SSC, married Razani Kanata Barmn without her parent’s permission.

In lieu of advancing in school, she became a housewife. In spite of her happy married life, the oppression of women and severe poverty surrounding her made her sorrowful. She sought ways to change the situations around her. Inspired by local Union Parishad Chairman Alamgir Haydar, she joined the animators training batch No. 62, provided by The Hunger Project (THP)-Bangladesh. During the training, she was motivated by the vision of an ideal village and women’s empowerment. She believed in The Hunger Project message of “Unleashing the human spirit for ending hunger and for women’s empowerment.”

These experiences transformed her mindset. Subsequently, she began speaking to the women in her community and mobilized a grassroots organization. This organization is currenlty working to promote women’s empowerment, taking action against violence and organizing self-reliant action to end hunger. Women’s leadership development training through THP-Bangladesh has helped her further advanced her leadership skills and confidence in her grassroots efforts.

Gita has been so successful in inspiring others that she was asked to speak at The Hunger Project Global’s Annual Fall Event in October 2010 – Watch a video of her speech.

Learn more about The Hunger Project in Bangladesh.

How we celebrate girl children in Bangladesh.

You can make a difference in the lives of women like Gita.