Putting a Vision into Action, THP-Bangladesh 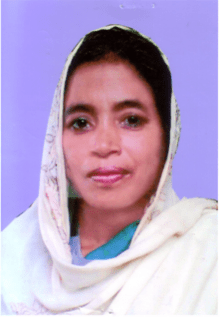 Jesmeen is an empowered, self-reliant woman in the village of Shampurtati. Although she was continually faced with severe poverty, she learned that the power to conquer it was within her grasp.

Jesmeen was the second oldest of nine brothers and sisters. As a child, she was an attentive student, who did well in school and earned top grades on her exams. Her family’s only source of income was a small plot of agricultural land, which was insufficient to support so many children.

When erosion stripped away a large portion of their land, Jesmeen’s father was forced to take her out of school in order to help support the family. Later on, Jesmeen went to live with her maternal uncle to try to relieve the family’s financial burden. Once again, she enrolled in school.

At the age of only 15, as a student in the seventh grade, her parents forced her to marry an older man, who worked as a school teacher. Despite being forced to marry, Jesmeen remembers their short life together as a happy one.

After only a brief time, Jesmeen’s husband became severely ill. The subsequent expenses exhausted almost all of their savings, but despite treatment, her husband eventually died. Being left with no assets at all except a small boat, Jesmeen was forced to take shelter in her brother’s home.

Even in the face of these events, Jesmeen remained committed to overcoming her poverty. She enrolled in a local course, a training in sewing and tailoring skills, to begin generating income. At the same time, she became inspired by a local animator working with The Hunger Project-Bangladesh (THP-Bangladesh). Jesmeen decided to become an animator herself, and she participated in the 764th round of training.

As a THP-Bangladesh animator, she gained a new perspective on her life, and her mindset changed radically. Jesmeen glimpsed a vision of an ideal village, in which women were empowered. She was deeply moved; she felt as though she were transformed into a new woman.

Jesmeen decided to do something that would not only improve her own economic condition, but that would also transform the condition of other impoverished women in her community. She formed a women’s credit union named “Shamoly Mohila Samity.” The union requires members to deposit a small fixed amount every month, thereby creating a resource pool from which the women can withdraw self-help credit.

Thanks to these loans, many women have been able to start income-generating activities, such as small-scale sales, block-batik (printed cloth) making or tailoring.

Jesmeen has passed on her knowledge, providing sewing training to 60 women in her credit union. Under her leadership, members of the organization are running campaigns to raise awareness on nutrition, sanitation, education and primary health care.

Today, Jesmeen enjoys a comfortable monthly income of more than 6,000 taka (US$87), and she can afford to pay for all of her children to attend school. Jesmeen’s happy face is now well-known and respected in her small community.