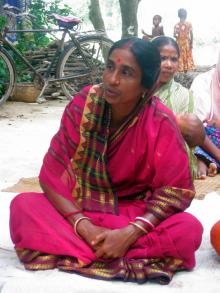 Srimoti Diti Adash is an empowered woman who is mobilizing her community in Patichola Union (in the Naoga district of Bangladesh). She works to improve hygiene, sanitation and access to safe drinking water.

Srimoti, a Hindu woman, is married with two children, and estimates herself to be about 40 years old. She lives in a rural, primarily agriculture-based area where hunger and deprivation persist, and where women are widely considered inferior to men.

In September 2008, Srimoti was invited by a member of her Union Parishad (local government body) to participate in The Hunger Project (THP)-led animator trainings. These focused on achieving Community-Led Total Sanitation (CLTS).

The trainings inspired and motivated Srimoti. Now, she is committed to mobilizing her community to build low-cost sanitary latrines and install tube wells for increased access to safe drinking water.

She holds courtyard meetings and leads mobilization workshops to educate villagers on better hygiene practices. She also advocates for children’s education and campaigns against early marriage and dowries.

Today, Srimoti is the designated Ward Catalyst, overseeing all CLTS activities in her ward, a cluster of three villages. As Ward Catalyst, she has conducted a baseline social survey of her ward. She mapped the location of sanitary and unsanitary latrines, and safe and unsafe water sources in her villages. She leads monthly WATSAN (Water and Sanitation) Committee meetings and is holding her elected representatives to account to ensure that they direct the necessary funds to her ward.

Srimoti says her greatest challenge lies in encouraging cooperation from the community.

“People are very poor, and are trying to support their families by working in the fields [as farmers]. I go to talk with them, but they are very busy, so it is difficult to get people to work together.”

Still, Srimoti is committed to tackling this challenge. She says that since becoming an animator and Ward Catalyst, she has experienced a lot of joy and a new way of thinking. She brings social problems that were once kept hidden out into the open. She talks with everyone and works to organize villagers to take self-reliant action. She is proud to be a community leader and is greatly respected.