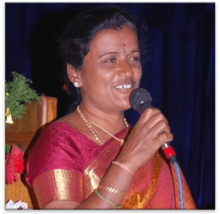 Smt. M Renuka is an active leader in both her local and national community. From her beginnings as a member of a middle class farmer’s family she has excelled and become a powerful community figure.

She currently serves as a Ward Member in the Namagondlu Panchayat, Chikkaballapur District in the state of Karnataka in India, a position she was elected to in both 2005 and again in 2010. She also serves as President of Karnataka State Federation of Elected Women (SUGRAMA), a well respected federation of elected women representatives. She came to these positions with the strong support of women’s self-help groups and the poor for whom she speaks.

Renuka’s relationship with The Hunger Project (THP)-India began when she attended several THP trainings to support knowledge and skill development. Motivated by these sessions, she took it upon herself to become politically savvy and take part in policy making organizations. Her skills enabled her to contest and win the post of President of SUGRAMA twice. SUGRAMA is the only federation of its kind in India and South Asia, and has a membership of more than 2,000 elected women members.

“Now, together with all the members, I will be able to analyze the issues of women leaders in the Gram Panchayat. I am very happy and want to be a part of SUGRAMA forever,” says Renuka.

Under Renuka’s leadership, SUGRAMA has taken up several advocacy campaigns in the interest of elected women representatives. With the support of THP-India, she has led the campaign asking for 50 percent reservation for women leaders in Gram Panchayats in Karnataka. She has also aligned SUGRAMA to support a state network called the HAKKOTTAYA ANDOLAN, which resisted the government’s attempt to curtail the powers of the panchayat members.

Not forgetting her local community, Renuka used her newfound position to address problems faced by the people in her village. Her panchayat is often plagued by a lack of drinking water and the improper distribution of fair price commodities. She has taken immediate steps to solve these problems and focused additional energies on solving other pressing issues like education and health.

The dropout rate for girl children in Renuka’s village is frighteningly high. In an effort to reduce the number or dropouts, Renuka identified at-risk children in the village, spoke with the parents and motivated them to enroll their children in the school. Nearly 20 children have already returned to the schools. But, youth education is not the only issue. The literacy program for the non-literate elderly was also failing. Renuka motivated people in her community and took a personal interest in making the program functional.

Renuka’s achievements have been many. Her concern for the marginalized community can be seen in her actions. Under her guidance, her panchayat provided financial assistance to a boy from a below-poverty-line family so that he could study mechanical engineering after his schooling. She regularly visits the Anganavadi (government-sponsored childcare and mother-care center in India.), which is now recognized as a model in other panchayats because of its effective implementation of the government-sponsored integrated child development program (ICDS).

Renuka has played a predominant role in protecting the rights and interests of the elected women representatives. She has raised issues of honorarium for them, promoted women’s participation in the development activities of the panchayat and has led the fight against gender-based violence in the work and domestic space for elected women representatives (EWRs) at both block and state levels.

Continuing her support of EWRs, Renuka has played a critical role in the pre-Gram Panchayat election campaign in 2010, both as an elected woman representative and as the President of SUGRAMA. She has traveled to different blocks to conduct potential leadership workshops and motivated her own panchayat women members to contest in the election. She motivated three women to file their nomination in the panchayat and also supported them in getting all their papers in place within stipulated time before the elections.

Using all resources at her disposal, Renuka has built partnerships with the media and sought their support in her campaigns. With the support of other SUGRAMA members, she has called for more than 17 press conferences between January and September 2010.