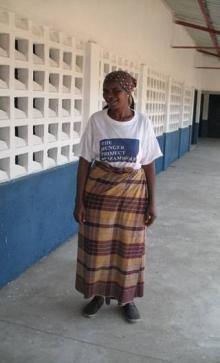 Mrs. Margarida Elias Nguenha is a 46-year-old wife and mother of two children. She is the Vice President of the Manhica Epicenter and a member of its loan committee.

She began participating in The Hunger Project (THP)-Mozambique’s Microfinance Program (THP-Mozambique) in 2001, when she took out an initial loan to fund an agriculture venture. Since then, Mrs. Nguenha has witnessed the many changes THP-Mozambique has helped her to make in her life. For example, she can afford for her children to attend private school, and she has even been able to continue her own studies.

Today, Margarida cultivates 15 hectares of crops and sells her produce at supermarkets in Maputo City.

She looks forward to continuing with her microfinance activities and her relationship with THP-Mozambique. Her dream is to earn her high school diploma, and to build a safe and comfortable house for her family.