May 2008: Profiles of Inspiring Hunger Project Animators in Dhaka, Bangladesh

In Bangladesh, the training of local activists, called “animators,” is key to all of our activities. Animator trainings are highly empowering, inspiring and motivational training programs. To date, we have trained 100,000 animators, who have been mobilizing a social movement to create a hunger-free, self-reliant Bangladesh. While most of our animators are in rural villages, we also have animators in Dhaka, the capital city of Bangladesh. Here are a few inspiring profiles contributed by Sander Mahieu from The Netherlands after a visit to Bangladesh. 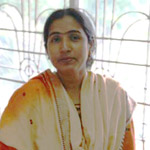 Rachida is educated in Islamic History (Masters degree) and has a law degree. She has been working as a lawyer for over three years.

In her work as an animator, Rachida mobilizes people, organizes issue-based discussions, and engages in a lot of problem solving. For example, she he took action when materials were stolen from schools because there were no night guards. She organized a meeting with the commissioner and other distinguished people from the schools. Now, schools are being guarded at night. Rachida also leads discussions with parents and children to prevent children from dropping out from school. 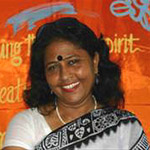 Mili comes from a large family, with nine brothers and sisters. She married when she was 13, although neither her father nor her father-in-law approved this marriage. But Mili was (and is, as you will read) a very determined person.

Because her husband was unemployed, a long and difficult road lay ahead, and they had to struggle for existence. This was even harder when their only child as born.

Mili took on a job at a handicraft organization and left after two years, around her 18th birthday, to start her own. Soon, she hired some employees and now employs 20 people. Mili is now earning sufficient money and is well-known in her community.

At the same, Mili works for a social work organization (for about US$6 per month), as she always wanted to do this kind of work for people.

In 1996, Mili was invited to a workshop conducted by Hunger Project Founding President Joan Holmes. She asked Joan many questions, became very inspired, and was determined to become an animator. Mili participated in an animator training in 2000 and a training of volunteer trainers in 2001. She also established a new organization to help street children and deprived women in the slums (of which there are 20 in Dhaka), and she is taking many actions to improve society.

Because Mili had visited Calcutta earlier to share her experiences, she was invited to join Joan Holmes and Badiul Mujamdar, Country Director of The Hunger Project-Bangladesh, when they went to Calcutta in 2005. The Bangladesh national television (BTV) broadcasted a special story about all Mili’s activities, including mentioning The Hunger Project.

Her ambition? Political leader in the City Corporation! 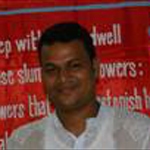 Jahangir graduated with a degree in commerce and computer science. While he was at a computer training, he met someone who was already involved in The Hunger Project and inspired him to sign up for an animator training. Jahangir took the training in 1998. He was in batch 98; each training has a batch number and includes about 60-120 people (To date, The Hunger Project has had more than 1,500 batches of animators). The training completely changed Jahangir’s mindset and from then on, he has been implementing initiatives for his community, such as arranging donations programs and taking on environmental issues.

Jahangir has set up a driving institute, where people (from ages 18 to 40) can obtain their driver’s license at a reduced price, and then start working as drivers for cabs or wealthy people in Dhaka. More than 300 men and 200 women are already licensed as a result of his trainings. Now, Jahangir is setting up a computer training center. He is also involved in Shujan, an organization for good governance, of which The Hunger Project catalyzed the creation. 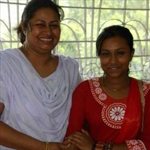 For a long time, Asma worked with Save the Children and mobilized and educated children. She had participated in many trainings, but when she was invited to The Hunger Project’s animator training, a whole new perspective opened up for her.

Lubzana, her daughter, said: “My father died two years ago and my mother was very sad. Having two daughters in a society and culture in which daughters are seen as burdens, she had a hard time and did not know how to get out. She had many, many problems, felt hopeless, and had no time for herself. But, after the four-day animator training, a new human being stepped into our house. She has totally changed, showing self confidence and courage, and taking her life again in her own hands. My mother is supporting me to go to school and get the highest level of education possible. She is really a wonderful mother and an example to me and to all her friends and community!”

Lubzana, herself, is a very bright girl, extraverted, fast speaking and determined. She got into the National Parliamentary Debate in December 2007. Having won the semi-final, her team members (all ages 14 to 16) did not think they could win the finale as well, because their opponents were already 19 years of age. But then Lubzana thought of the animator training she did, and she convinced the others that they had the power within them to win. She did not lose hope and was determined. She had to play the role of the Prime Minister, on the subject “Change you value: can we use violence against women?” Her mother supported her, and so did other Hunger Project animators. And? She won!

And I’m sure I’ve seen the future prime minister of Bangladesh!