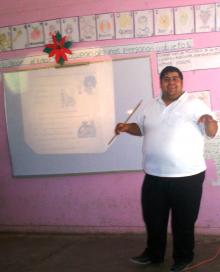 Gilberto Orozco is a young high school teacher and physician who lives in Torreon, Coahuila in Mexico. He participated in a Hunger Project Vision, Commitment and Action Workshop (VCAW) in 2005, and since then has been participating as a volunteer. He won a national prize for cultural and technological proposals outlining short and long-term actions for dealing with pressing environmental issues. He is now a volunteer trainer and very effective in inspiring others. He currently serves as a volunteer municipal coordinator for San Juan de Guadalupe Municipio in Durango. Orozco’s life has turned from being, as he described, “empty and bored” to one filled with a “passionate commitment to humanity.”

Learn more about our work in Mexico.

Support The Hunger Project in mobilizing thousands of other volunteers like Gilberto.