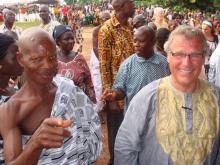 In July 2010, a group of Hunger Project investors made our way to Ghana on one of The Hunger Project’s (THP’s) Investor Leadership Trips. This particular group of investors, originating from the Netherlands, Sweden, United Kingdom, Australia and United States, are devoted to being a part of a current fundraising initiative known as the Robertson Match, made possible by a grant from the Robertson Foundation that provides matching funding for any investments in our scale-up program in the Eastern Region of Ghana.

We began our trip at THP offices in Ghana’s capital, Accra. Staff members gave a thorough briefing on current THP-Ghana efforts before putting all 21 of us on a bus bound for the nearest epicenter, a two and half hour drive east. We were joined by Ghana’s Country Director, Dr. Naana; Program Officer, Mr. Isaac; Microfinance Officer, Janet Asabre; and JS, in charge of scale up in the Eastern Region.

During the following three days, we visited five epicenters, including two that were just being inaugurated. We were invited to attend the commissioning of a new primary school in one of the epicenter communities and visited a palm oil processing center, an income-generating project, of another. Throughout our visits, the spirit and the messages that greeted us were consistent: these people were in action to build a better future for themselves, their families and their communities.

At one particular epicenter commissioning ceremony, it became apparent that, we, Hunger Project investors, were but one group committed to investing in these communities. Two men stood in front of the crowd with a large pot and proceeded to ask everyone, villagers, local government representatives, tribal chiefs and “queen mothers” alike, to contribute to a maintenance fund for the epicenter. Whether or not they had much to give, we were moved as people stepped forward to invest in their own community and put money in the pot.

At each stop, in our interactions with local staff, volunteer community leaders and villagers, we were struck by a common openness and willingness to share. Even tribal chiefs, often less receptive, were present at every meeting, gathering and inauguration we attended. In one village, we asked a chief how local men were responding to THP’s focus on women’s empowerment. His reply was encouraging, “When there are things we don’t understand, we ask the women and they explain it to us!”

Eunice, a THP animator, summed it up brilliantly when one of the investors asked about the effect of the epicenter’s Vision, Commitment and Action Workshops: “People change from ‘I can’t do it’ to ‘I can do it.’ ”

Before departing for our separate homes, the investors gathered for a final meeting to discuss our experiences in Ghana. These are some of our lasting impressions:

Learn more about our work in Ghana.