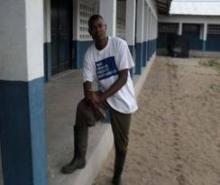 Mr. Azarias Guilambo is 24 years old, married and the father of two children. Azarias is an animator at the Manhiça Epicenter and joined The Hunger Project (THP)-Mozambique in 2008.

Before joining THP-Mozambique, Azarias was working with another project called Pathfinder as an animator and activist. He was trained by this international NGO as a community health agent, an experience that has made him a crucial part in organizing thematic Vision, Commitment and Action Workshops (VCAWs) about health care in epicenters.

According to Azarias, since joining THP-Mozambique, he has benefited greatly from trainings held in the epicenter, especially in food production, food processing and plant nursery techniques. He applauds the epicenter building and facility resources that have so helped the villagers in Manhiça.

But Azarias recognizes that there is still work to be done and is working along side other community members to improve his epicenter in a number of ways. For instance, he would like to see an extended loan repayment period, greater loans for agricultural activities, and better coordination with health sectors in local government to train villagers in epicenter heath care.