From Poverty to Empowerment: Moises’ Story

“Poverty in our village was at an extremely high level, so when I heard that The Hunger Project-Mozambique aimed to empower the community to alleviate poverty, I decided to join the program without any hesitation,” says 57-year-old Moises Fenias Malhaule. Moises lives with his family the 25 de Setembro village, in the Chokwe Epicenter of Mozambique.

In 2006, his village saw very high levels of poverty, so Moises decided to join The Hunger Project-Mozambique after the first community mobilization workshop. Over the past 10 years, he has participated as an animator, a microfinance partner, and a literacy student.

In 2008, his animator training enabled him to receive loans from the Microfinance program. With these loans, he expanded his small business and farm, taking care of his family by providing for the education of his children.

Then In 2012, Moises joined trainings on improved barn-building techniques and the manufacturing of stoves that use less firewood. Two years later, he attended workshops on constructing rainwater harvesting and conservation systems.

His desire for self-improvement has seen him contribute to the social and economic well-being of his village. 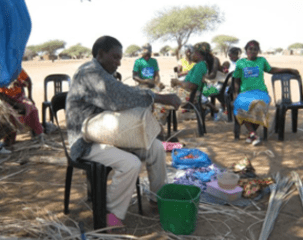 Now Moises is also sharing many of his newly learned skills in manufacturing handcrafted goods by leading training workshops himself!

Looking back on the past 10 years, Moises has a deep appreciation of the presence and support offered by The Hunger Project-Mozambique to his village. At the same time, he recognizes that there are many other communities across the country that haven’t been reached yet.

“I hope to see those communities receive the same opportunities as we did,” Moises says.

Learn more about our Epicenter Strategy