Finding the Path to Prosperity in Ethiopia 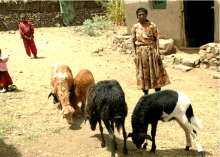 Fayise Dhaabaa belongs to the women’s loan group of “Wakene Kebele” at Debre Libanos Epicenter. Married and a mother of seven children, Fayise has been working in agriculture all of her life. Currently, she lives about four kilometers away from her local epicenter.

When Fayise joined the Microfinance Program (MFP) in 2007, she was interested in earning some extra income, in order to improve her family life. She received her first loan in 2007, and with 300 birr ($22) bought two young sheep.

Of the two animals, only one survived into adulthood, but Fayise was not discouraged. When her loan repayment date approached, she sold the surviving sheep’s offspring for 200 birr ($15) and kept the mother.

With a second loan of 600 birr ($44), Ms. Dhaabaa decided to diversify and stabilize her sources of income. She bought an additional sheep, two chickens, and a small amount of wheat seed for cultivation. She harvested 400 kg of wheat, sold 200 for 900 birr, and kept the remainder for eating and planting the next year.

More good luck struck when her two sheep subsequently doubled to four. Her family was able to slaughter one of the sheep and enjoy a special holiday feast.

With a third loan, Fayise invested 800 birr (59$) in buying a cow. She bought the heifer in order to provide a source of both food and income for her family.

Apart from her loans, Fayise has attended various trainings and workshops conducted by the MFP, including those on savings management, income generation, family planning, environmental sanitation and compost preparation.

Ms. Dhaabaa’s entire family has been very involved in their own development; they built a pit latrine for their home compound, and her husband has supported family planning, using contraception within their marriage.

Ms. Dhaabaa continues to save a small amount every month; currently she has 7,200 birr ($532) in a savings account. The money which she takes in from the sale of eggs makes up the bulk of her savings.

Fayise places great value on education. All but her two youngest children have begun attending school. She herself is hopeful that she can attend literacy classes at the epicenter as soon as they begin.