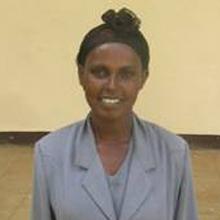 Derare Hirpha, a 37-year-old married mother of six, is a Jaldu Epicenter committee member and secretary of the management committee of the SACCO (the name of the Rural Bank established by our Microfinance Program). The Hunger Project (THP) staff in Ethiopia recently interviewed Derare to capture her inspiring story.

“I lost my mother when I was six years old and the responsibility of raising the children remained on the shoulder of my father…My father was a conservative man and he was very serious and strict in our traditional upbringing (more so with us girls). He always worried, especially [about us girls getting pregnant] before marriage since it is considered taboo. Therefore, we were very careful not to make him sad if we made any mistake. At that time, my father sent all his children to school. To avoid the problem, my father facilitated my engagement to someone as a fiancé while I was at school.

“My dream shattered after I was promoted to eighth grade. One day when I was walking to my home from school, a man abducted me and took me far away from my home. At that moment, I lost all hope of getting an education. I was totally disappointed. I couldn’t even get a chance to marry my fiancé. After I lost my virginity, the family of my abductor sent a message to my father that I am with them and safe. According to the culture, if a girl is abducted and lost her virginity, her family will never take her home and therefore they had to accept the marriage and make peace with the abductor’s family through elders’ arbitration. Based on this condition, my abductor became my husband and I quit my school… 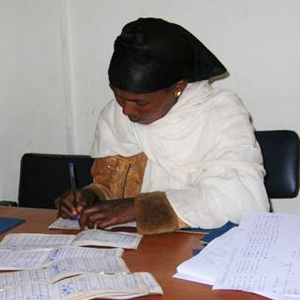 [In 2005, THP-Ethiopia came to Jaldu, and that is when Derare became involved in our work.] “I attended the general Vision, Commitment and Action Workshop (VCAW) and a VCAW focused on microfinance. I was inspired by the objectives of the project. My heart started to shine again when the organization clearly stated its commitment in promoting gender equality through women’s empowerment programs with focus on its Microfinance Program for women. Upon the first election of Epicenter Committee members, I was elected as one of my kebele’s [village’s] representative in the committee. Later on, with a woman vice-chairperson of the Epicenter Committee, I was elected [to the Epicenter’s] Microfinance Program for Women’s Committee. After the election, I attended various trainings. I remember attending the first day training on leadership; a writing pad and pen was provided to us. On that day, I thanked God since I got back to writing after 17 years of marriage. After my marriage, I used to engage in household chores only.

“I was one of the members of the initial loan group of women from my kebele. THP-Ethiopia’s [work] in our area helped me plan my future. I became a member of the loan committee and this helped me reassess myself and to help other women by disseminating information obtained at the epicenter. During the mobilization process, to promote the program, I remember helping other women to start their deposit schemes by giving them my own money since they did not have any money on their own.

“Initially, I received birr 400. I bought a heifer and a sheep. I was able to earn a profit…from the sale of the heifer after repayment. With this profit, I was able to go to the hospital and get treatment for my eye. After I successfully repaid my first loan on time, I was able to access the second round of loans, birr 600. With this loan, I bought a donkey…and chickens. I used the donkey mainly for three things: to transport water for household use from river, to transport grain to grain-mill and to transport consumer goods to market for sale. From the donkey alone, I got a profit of around 600 birr. I used part of my profit for [an eye] operation… and part of it for buying clothes and school materials of my children. After repaying the second round loan, I received a loan of birr 800 for the third round. I bought a calf and goats. I sold the calf…and two goats [for a profit]. By adding part of the income from my chickens’ egg sale, I made the loan repayment on time. I used part of the eggs for household consumption as well. After the repayment, I reserved three goats and five chickens at my home as my asset. Last time, I received the fourth round loan of birr 1,000. I bought heifer…and oilseed to engage in marketing. I planned to keep the heifer to get milk [which] I will use…for household consumption and part of it for sale. Having a heifer at home is by itself considered as an honor since it increases the status of the family in the community.”

Derare says her participation in the Microfinance Program for Women helped her change her perception of herself. At the beginning, she was totally economically dependent on her husband. She says: “As a result of the Microfinance Program for Women, I am learning business management, generating income and I own various assets. The program helped me to bring my health back. I am relieved from eye problems. Today, I am a confident woman who can speak out my opinion openly in public. Besides, I am able to support my family with the profit I get from my activities in providing them with nutritious food consumption as well as by providing my children with clothing and buying their school materials. Currently, all my children are at school ranging from first to ninth grade, and I always advise them to keep up in their education since I know the fruits of learning. In addition, the program encouraged me to be an active member of the committee through the talent I have from attending various trainings. Some of the trainings I attended includes leadership skills, saving and credit management, environmental sanitation, HIV/AIDS, family planning, home management and gender issues. Based on the trainings, I built a pit latrine…[and] I learned how to build an improved stove from mud. Recently, since I got additional income, I replaced the mud stove with brick.”

Before her involvement with THP-Ethiopia, Derare never thought of having her own writing pad and pen; now, she expresses how happy she is that she has returned to reading and writing. She proudly stated that she even started to write a poem.

Today Derare is living with her husband in peace. He now considers their household resources as their shared, common assets. She said that he is respecting her and supporting her efforts to improve their family’s life.