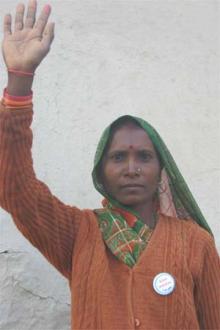 Radhia Adivasi is the sarpanch (village governing council chairperson or President) at the Chak Dehi village in the state of Mahdya Pradesh. She is a tribal woman, which means she faces all the marginalization and exclusion that Dalits, also known as untouchables, experience. She is 30 years old and at the end of the day, the strength of her leadership seemed to be an inverse of her physical size – she’s about 4 ½ feet tall and could hardly weigh 80 lbs. She wore a beautiful red sari over her very dark skin and gold post in her nose.

Radhia lost her mother when she was a young child and she immediately became the one responsible for the maintenance of the household. She has never attended school. She is illiterate and only learned how to write her own name after she was elected to office in 2005. She is married but has no children. You could see in her face the pain of being childless especially in a society that considers children, especially boy children to be the key to your survival as you age while considering childlessness to be caused by a curse or some kind of witchcraft.

Radhia’s husband works in Satna, the nearest town, as a rickshaw puller (pulled by bicycle). Everyday he walks a couple of miles, crosses a river bed that is impassible during the monsoon season, and then catches a bus for a 45-minute ride into town. Once there, he rides all day and returns home the way he came and sometimes not until 10pm at night. For this work, he makes 60 R a day or US$1.50. Of that, one-third goes just to cover his daily bus fare. Radhia is unable to do wage labor due to health issues (including a heart condition). At first my poor math led me to have a whole new appreciation of what it may be like to live on $1/day. Then I realized two people are living on this amount. She does receive a card from the state that allows her to buy rice and wheat for half the going rate at a local government store. When asked whether she is ever able to eat any meat or vegetables, she said that occasionally her husband will bring some home from Satna. 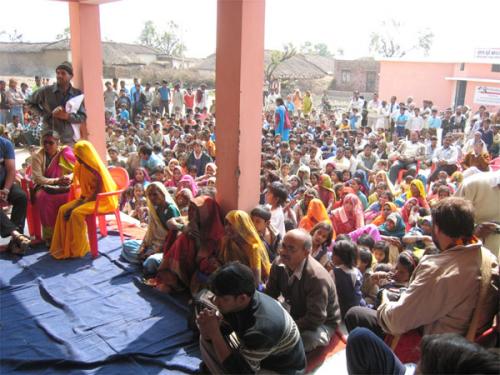 And this is the woman who heads the village council responsible for the well being and improvement of the lives of 1,800 fellow villagers.

We learned more about Radhia and other elected women representatives when we asked to meet with other village women without the presence, interference or interruption of any men from the village – which involved a continuous and strenuous battle to keep the men out. It was there that we learned from a local midwife that she had never been trained and had no access to sterile instruments. Instead, she is forced to use the same blade to cut the umbilical cord of each child she delivers.

We learned that it was Radhia’s leadership that led to the construction of four additional schoolrooms during the first three years of her term as chairperson of the panchayat. The rooms were beautiful concrete, well painted, high ceiling classrooms for upper grades – 7th and 8th standard.

To accomplish this she, along with the president of the village Parent Teacher association made trip after trip to the district official’s office. She also worked with the panchayat secretary, a paid government position who must be literate, and first obtained the land from his brother in law. 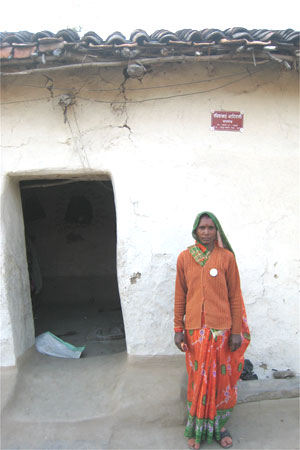 There’s a lot more to be said about Radhia’s strategy for getting more schoolrooms for girls in grades 9-10 so they are not at risk of assault walking far to the nearest school. And her plans to maneuver a local member of parliament to commit to moving ahead with a much needed bridge so villagers are neither isolated nor endangered during the annual monsoon season.

I’ll close with something that Radhia said as we walked back from seeing where the river bed flooded and where the new bridge would need to be built.

I asked her if she planned to run for a second term in 2010. If she chose to do so she would have to run against village men for seats not reserved for women – no small challenge for an illiterate, tribal woman with no children and a heart condition currently living on less than $1/day.

Without any hesitation, she responded, “Of course, there is much work yet to be done.”