In Ethiopia, Tsege is empowered to succeed and thrive as a single mother and farmer 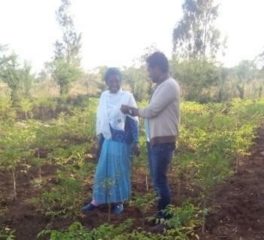 “It has been a life changing journey since I’ve been involved with The Hunger Project-Ethiopia. It feels as if my life has been rescued and the darkest times are far behind me,” said Tsege Searko, describing the transformation in her life and her family.

Tsege was born in the Mesqan region in the central highlands of Ethiopia. She married and gave birth to two beautiful daughters and a son. Unfortunately, her husband passed away and Tsege, who had been a housewife and stayed at home to care for the children, found herself struggling as a single mother. Without agricultural skills or previous work experience, Tsege worked hard to support her family. It was a challenge to provide just a basic meal each day.

Eventually, Tsege learned about and joined an intervention kebele (village) that was part of The Hunger Project-Ethiopia’s Mesqan Epicenter. At the epicenter, Tsege attended activities organized by the Women’s Empowerment Program, including trainings on gender equality. From these activities, Tsege gained the confidence and awareness that she could be as successful as any man. In addition, the epicenter provided training on how to use and manage her farming resources in modern and efficient ways and the Microfinance Program provided her with a small loan. Tsege implemented the agricultural methods she learned and invested the loan back into her farm.

With the support and training she received, Tsege was transformed and empowered emotionally, mentally and physically. It has now been several years since Tsege attended her first training, and she is still providing a  sustainable, modern and happy life for herself and her children, who work with her on the farm.

In 2015, The Hunger Project-Ethiopia launched a moringa plant project. Tsege was among the first at Mesqan Epicenter to become involved with the project and now grows moringa plants in her home garden. She plans on expanding her moringa garden outside of home use and eventually selling it at the market, which could provide a long-term and sustainable income stream outside of her farm.