Ending hunger by 2030 is possible–and it starts with empowering women at the grassroots level to help transform communities so they can lift themselves out of poverty. Empowered women, like Tasly, are one of the essential tenements to ending hunger and poverty. Read Tasly’s story and Rethink Hunger.

Tasly was born in 1976 in the Baroidanga village of Satgambug Union in Bangladesh. Despite her limited means, she was very successful in school and received a Higher Secondary Certificate (high school). She dreamed of completing higher education, but was soon married off by her family. Her educational aspirations were no longer in her control. During her second year of marriage, she gave birth to a baby girl. Unable to pay the dowry being asked of her, Tasly r 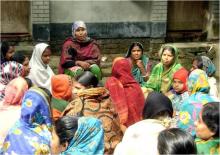 eturned to her father’s house with great sorrow. She began giving private tutoring lessons as a way to support her new life with her daughter.

In 2008, The Hunger Project-Bangladesh arranged an Animator Training on microfinance near Tasly’s village. After attending the training, she and 25 other women formed a cooperative society, named “Dahuk Women Savings Samity,” to keep track of their individual savings. During weekly meetings, they discussed social and community issues like early marriage, dowry, antenatal care, postnatal care and compulsory primary education. Over time, their cooperative’s savings has increased to 100,000 taka (US $1,285). With these savings, they offer loans to other village women for different kinds of income-generating activities like fishing, tailoring, goat and cow farming. Each cooperative member averages an income of 2,000 taka (US $25) per month.

Tasly has embraced her role as an active leader in her community. In 2012, Tasly and 18 other women attended the Women Leader Foundation Course, a training arranged by The Hunger Project-Bangladesh. After completing the course, Tasly attended monthly follow-up meetings arranged by The Hunger Project to bring new social development initiatives to her village. These initiatives ranged from sanitation practices, planting trees, birth registration, enrolling children in school, and prevention of early marriage. In that same year, a Women’s Network was formed in the union of Satgumbuj and Tasly was elected as the general secretary of the committee. She was also elected as a member of Patorpara Primary School’s managing committee and Satgumbuj Union Parishad’s committee of educational affairs. Under Tasly’s leadership, a women’s organization was formed in each ward.

Currently, Tasly works for a local NGO named Gonobidaloy. Her journey is a prime example of the importance of economically empowering women and letting them play a central role in shaping their community.