Determined Elected Woman Improves Education and Sanitation in Her Community 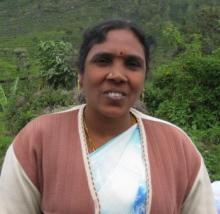 Raja Mari, a partner of The Hunger Project-India, is president of the Kunjappanai Panchayat (village council) in the Nilgiris district, a mountain area in the south of India.

Most of the regional population supports themselves by growing tea or working for someone who does. Raja’s husband works in a teashop to support their two children attending school. Raja is a Dalit class woman and lives near many indigenous peoples. She developed an understanding of their daily struggles and is committed to helping them escape the unfair situation in which they find themselves.

Even before her appointment as president, Raja worked with indigenous people. Determined to expand her efforts for clean water, education and income, she ran for office three years ago. Raja was elected president of her panchayat with the majority of the votes coming from the indigenous people of the 42 villages in the area.

“Participating in The Hunger Project’s Women’s Leadership Workshop gave me self-confidence, motivation and courage,” she says. During these workshops, she learned that her panchayat has the right to decide how to allocate government resources for development. She now uses those resources to actively mobilize greater participation in gram sabhas, which are community meetings where anyone can openly discuss an issue with their local government.

During her three years in office Raja has focused primarily on education and sanitation. Schools in her community have improved and playgrounds have been built. Awareness of the importance of schooling for both boys and girls is increasing, and more children, even from very poor families, attend school. Efforts to improve sanitation have resulted in the installation of toilets in several homes and villages. Trash is organized in dedicated places and there are street lights in the more populated areas.

During her work, Raja is constantly facing new challenges, often within her own panchayat. Her work for new pipes and clean water was actively opposed by a panchayat man who lost the presidency post to her. Negative messages are regularly spread throughout the community by members opposed to Raja’s efforts and significant time is spent campaigning with accurate information.

Despite these setbacks, Raja believes the most important issue is to raise the questions that the people ask her to raise. Most recently, she has been asked to acquire a share of financing issued by the government to poorer people for the construction of houses. Her success in this matter could determine the outcome of next year’s panchayat elections.

In the upcoming months of her term, Raja hopes to make elected official positions in the panchayat paid work. At the moment, all officials work on a volunteer basis and members often lose income in their efforts. The National Rural Employment Scheme states that all positions are paid for the initial 100 days in office. But the meager reimbursement of 12 rupees per day (US$2) deters people from wanting to participate in the panchayat. Raja wants to increase local involvement by providing paid compensation. She will soon take this matter to higher political offices, both federations and ministries.