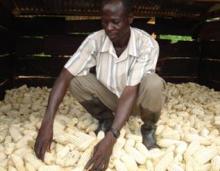 David Tetteh, 45, is a farmer and resident of Abourso in the Dorminase Epicenter in Ghana. He became involved with The Hunger Project (THP) in February 2008 after a Community Animator, Felix Narh, organized a Vision, Commitment and Action Workshop (VCAW) in the community. Through the VCAW, his perception of life was transformed completely and he became more committed to his own development and that of his community.

Mr. Tetteh was nominated by his chiefs and people, having noticed these changes in him, to represent Abourso on the Epicenter Committee. Due to his dedication and commitment to the epicenter work, he was elected as Vice Chairman to the Epicenter Committee. He was also identified and trained by THP as an Agricultural TOT (trainer of trainers). Until his involvement with THP, Mr. Tetteh did not think that he had any chance of making it in life, and this was reflected in his attitude toward work generally. Since his contact with THP, he gained a lot of confidence and now believes very much in himself and his community as a result of his participation in a series of VCAWs, epicenter meetings and training programs.

Mr. Tetteh traveled to other communities within the epicenter to carry out educational sessions and visited their farms to demonstrate good practices such as row planting, weed control and fertilizer application. He encouraged his community to cultivate a group farm, which served as a demonstration farm for other farmers. With support from THP, he helped put up a maize storage crib in the community.

This year, Mr. Tetteh cultivated nine acres of maize during the major farming season, compared to the two acres he planted previously. His income level has increased remarkably through the sale of his farm produce, and his household now has adequate food. He has expressed a desire to educate his children to the highest levels possible. The fact that Mr. Tetteh became involved with THP barely two years ago makes his story very impressive.

Photo: David Tetteh drying cobs of maize from his farm

Learn more about our Epicenter Strategy in Africa