Building a Farm from the Chicks Up in Benin 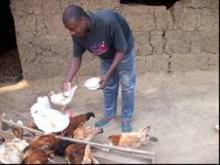 Mr. Anagonou Gangnon Hounzavi is an example of a partner who has succeeded in making his vision a reality.

Mr. Hounzavi is 35 years old. He is married and has a 10-year-old daughter. He used to live in Cotonou but then migrated back to his rural village, Yénawa-Hahamè in Kpinnou Epicenter in 2006. He tried, unsuccessfully, to become a medical assistant. He decided then to get involved in chicken breeding. Here too, he failed since he had no prior training for that.

Casually, he was informed that THP was organizing a meeting with the population at Hahamè on chicken farming. At the meeting he heard a statement that stirred him: “Poverty should not be for villagers in your context …” The link between crop farming and domestic animals breeding was emphasized to the participants. He meditated on this deeply and drew from that a path to his vision. He decided to follow the stream so far as to see the outcome.

Mr. Hounzavi was one of 50 participants who took part in the THP chicken farming training, and he quickly applied the skills he learned. With his own means, he started a poultry farming unit with only six chicks in early 2007. Today, he has more that 115 chickens. By selling them in the market, he succeeded in starting a rabbit breeding unit with two females and one male in 2008. To date, he has 10 female rabbits, four males and 94 young. The average cost of a five-month old rabbit is CFA 3,000 (US$6). He is an important supplier for some restaurants in the city of Lokossa, about 15 km from his village. He also uses rabbit excrements to fertilize his own farm. 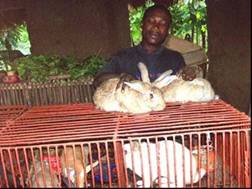 Through his experience, he has mastered the skills of treating the animals through vaccinations and administering appropriate medicines when need be. His neighbors count on him for assistance with this much needed skill.

Mr. Hounzavi says that thanks to THP, he has learned that “God has endowed us with all we need to be self-reliant and developed. What we need is to be brought to the light to get the skills we need to turn our standard of living into paradise.” He added that he is committed to go his way.

He is able to support all of his family on a daily basis from the resources provided from his chicken sales (only two or three chickens when the need arises). With the revenue he yields from the chicken breeding unit, he managed to build a house for the rabbit breeding unit and start the activity. Today, 10 people, including three women, train with him on chicken farming. He is very proud to talk about his experience.