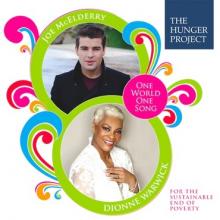 World Hunger Day (May 28) was launched by The Hunger Project-UK in 2011 to inspire people around the world to join together in solidarity to support all of those working to end their own hunger and poverty and make the journey to self-reliance. We’ve seen massive response over the last two years, including a 5,000-person concert at the Royal Albert Hall in London and dozens of organizations taking up the cause.

We hope that World Hunger Day will encourage even more people and organizations to work in partnership with one another and with the women, men and children in the developing world who seek to bring about a sustainable end to their own hunger and poverty. Read more about the purpose of World Hunger Day.

This year, The Global Hunger Project family is celebrating World Hunger Day with the release of the single of One World, One Song. Following its world premiere at the Royal Albert Hall in 2012, we will release this very special ‘We Sing, You Sing’ charity single, featuring Dionne Warwick, Joe McElderry and more of the original cast, with a twist! Not only will you be able to purchase a spectacular recording of the song to listen to (with all proceeds invested in The Hunger Project), but you will also be able to join in and create your own version of the song!

Also happening on World Hunger Day 2013: THP-UK has created a cross-curricular schools project based around the song and its meaning. Find out more. And, THP-UK is also hosting an exciting series of intimate live concert events in central London on May 26, 27, and 28.

This World Hunger Day, will you stand in partnership with the women, men and children who are working to end their own hunger? Get involved now: Invest in The Hunger Project. Join in our song!

Get Involved Every Day