Breastfeeding is one of the most effective ways to ensure child health and survival. That is why The Hunger Project celebrates Breastfeeding Week from August 1-7, 2017. World Breastfeeding Week is a time to galvanize a variety of actions and engage with a wide range of actors around the promotion, protection and support of breastfeeding. It focuses on ensuring that women receive the needed support and health care before, during and after childbirth and promotes various measures to ensure the safety of mothers and their infants to experience optimal breastfeeding.

Evidence on the benefits of breastfeeding is abundant. Breastfeeding aids the survival of infants and helps them thrive, has long-term health benefits for women, yields economic benefits and enhances the well-being of all.

Breastfeeding lays the foundation for good health for all children both in the short and long term, while also benefiting mothers. Recent evidence confirms that optimal breastfeeding could save 823,000 child lives from acute and chronic disease, save 20,000 mothers’ lives from breast cancer and add $ 302 billion to the global economy annually. 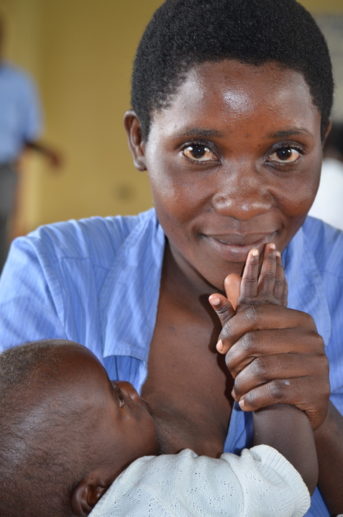 However, global breastfeeding rates have remained stagnant for the past two decades. Less than 40% of infants under six months are exclusively breastfed. In fact, women face many barriers to breastfeeding including receiving inaccurate information from health providers, a lack of lactation support from male partners within the household, and little or no access to skilled breastfeeding counseling.

The Hunger Project is a strong advocate of approaches that support the realization of the full potential of all women and children. The first step in doing so is ensuring adequate nutrition, protection of rights and gender equality. Many cases of infant malnourishment, which contributes to more than one-third of global child deaths per year, can be solved by simply ensuring exclusive breastfeeding for the first six months of a child’s life.

Across our programs, we’re making breastfeeding and good nutrition a priority. In our epicenters across Africa, tens of thousands of women attend workshops in which health care professionals explain the basics of nutrition for both children and mothers and the importance of pre- and postnatal care. In 2016, nearly 30,000 women accessed antenatal care services and over 148,000 children were monitored for health and weight at our epicenter clinics in Africa. In Bangladesh, over 60,000 women and men took part in specialized trainings on health and nutrition, which also included information on breastfeeding.

The World Health Organization (WHO) recommends that exclusive breastfeeding should be continued for the first six months of a child’s life and for it to be maintained while introducing other nutritious foods for up to two years and beyond.

Some estimates suggest that breastfeeding could save the lives of nearly 800,000 children a year in the developing world.

Children who are not breastfed during their first years are more likely to contract common illnesses such as diarrhea, pneumonia and asthma, which are responsible for the deaths of almost 1.4 million children per year.

While breastfeeding rates are no longer declining at the global level, only 39% of children less than six months of age in the developing world are exclusively breastfed, and just 58% of 20-23 month olds benefit from the practice of continued breastfeeding.

What You Can Do:

Invest in our work supporting and promoting healthy breastfeeding practices;