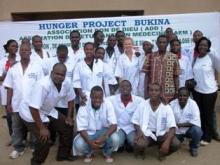 On May 14, 2011,The Hunger Project-Burkina Faso partnered with local health groups to organize a two-day educational campaign for HIV/AIDS, followed by free testing and free medical consultations.

An English transcript of the news story is below. 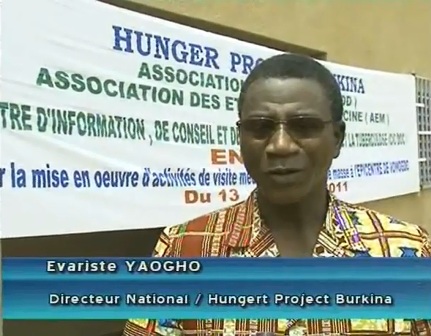 Host:
In Kouritenga [province in Central-Eastern Burkina Faso], the people from Vowogdo Epicenter joined forces for their health. Free medical examinations for the most deprived people: one couldn’t miss that opportunity to know their state of health and be given advice by specialists. The event, organized by the The Hunger Project and its collaborators, is set to prevent some pathologies, like high blood pressure and HIV/AIDS. Reported by Lazare Pouyat.

Reporter:
By choosing Vowogdo Epicenter, a village in the Liguidi-Malguem district in the Kouritenga province, as the place to organize its free medical examinations, The Hunger Project-Burkina Faso and its partners are looking to improve the health of the populations associated with the epicenter. This event, targeted for people over 16, focuses on prevention and screening for high blood pressure and HIV/AIDS.

Évariste Yaogho, Country Director of The Hunger Project-Burkina Faso:
We organized those free medical examinations for the populations of Vowogdo Epicenter because The Hunger Project is an NGO fighting against hunger, malnutrition and poverty. And sickness is one of the aggravating factors for poverty. That is why we thought it was important to tackle the problem of the diseases encountered by the populations to help them improve their health, to work better, and get out of hunger and poverty.

Nurse:
Everyone! Everyone will have a go! [as in ‘will be seen by the doctors’] Everyone!

Today we already have had 200 people.

Reporter:
The initiative has been welcomed by the Chief Doctor of the health fabric of Koupéla, the county in which Vowogdo Epicenter is located and the mayor of Koupéla, the county’s capital city, who were present on-site to encourage both organizers and recipients alike. The recipients have understood that screening for diseases early is a good thing.

Épiphane Belemkoabga, recipient:
We were examined, then they took us to the blood test, and they even gave us advice. To me, this is very good, for all the population, it’s great. They came to give us medical treatment, and that – because, you know, health is the most important thing for a person, yes. So this way I’d say it’s very good for all the population. You’re not losing anything; you’re losing nothing even, since it’s free.

Reporter:
Initiated by The Hunger Project-Burkina FAso, in partnership with the Association Don de Dieu (ADD), Medical Students Association (AEM) [stands for “Association des Étudiants en Médecine”] and the CIC-DOC, this day of free medical examinations allowed the detection of some pathologies among the population.

Pr Maïmouna Dao, President of the association “Don de Dieu” [Gift from God]:
Among the population, for men we detected hydrocele testis and inguinal hernias, which require surgery to be fixed. And as we said we are going to follow up on those… well, I can say those sick people. We will follow up on them, we will come back after to see how we can help them.
For women it was mostly ophthalmological [eye] problems, as well as urinary problems. And in those cases, we have to transfer their cases to the experts on those fields.

Reporter:
Organizers were forecasting that at least 400 people would come today, but that figure might end up being two or even three times higher.

Évariste Yaogho, Country Director of The Hunger Project-Burkina Faso:
We want to continue that kind of action with other medical specialties, and other medical conditions in order to cover the whole spectrum of the situations a person can be affected by when it comes to health. And not just with Vowogdo Epicenter, we want to organize this in all of our 15 epicenters.

Reporter:
This initiative, carried out by volunteers, is out to reduce the lack of availability of health that makes that patients often reach a public health structure when it is already too late, beyond any potential cure.