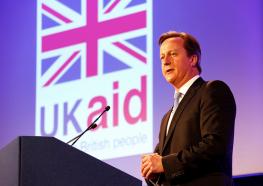 Earlier this month, world leaders joined together at the London Summit on Family Planning – cosponsored by the Bill & Melinda Gates Foundation and UK Aid. David Cameron, Prime Minister of the United Kingdom, opened the Summit, stating, “In a way, it is so simple – healthy, empowered women mean healthy, strong families mean healthy, strong children mean healthy strong countries. It is as simple and straightforward as that.”

During the Summit, development experts, government delegates and private donors agreed to raise 4.3 billion dollars towards family planning by 2020. This funding would allow women and girls from the poorest nations to access contraceptives and other family planning materials. The Summit was groundbreaking not only for global development, but for the foundation of women’s rights overall.

In an interview with BBC News, Melinda Gates noted that 800 women die every day during childbirth and that, in most cases, they do not have access to nearby clinics that offer contraceptives and family planning services. If women do have access to clinics, they are often pressured to keep their contraceptive use a secret from their husbands and community. With increased access to family planning services and a reduction in stigma, women and girls will be able to grow socially, politically, and economically in their communities – leading to healthier, more prosperous lives for millions in the developing world.

Cameron declared that the UK government is taking a new approach to development: “Development cannot be done to the poor by outsiders; it has to be driven by the people who need the change. Our role is to help the poorest countries create those building blocks of private sector growth and prosperity.” This message coincides directly with the mission and strategic direction of The Hunger Project. By pioneering grassroots, women-centered programs and advocating for their widespread adoption in countries throughout the world, THP believes that a sustainable end to world hunger and poverty is possible. The adoption of this mentality by governments, such as the UK, is a promising step toward our global goal.

The UK government and Cameron continue their increased development efforts with a UNICEF-hosted Hunger Summit on August 12 – the last Sunday of the Summer 2012 Olympics. The Hunger Summit will take a serious look at one of development’s hottest topics: food security. It will continue the conversation during this milestone year and identify actions necessary to accomplish the 2015 Millennium Development Goals.

Post by THP Communications Intern, Krisha Patel. Krisha attends Rutgers University where she is studying Public Health and Biological Sciences. She is currently active with the American Diabetes Association, the American Red Cross, the Foundation for International Medical Relief of Children and her university’s disability services.