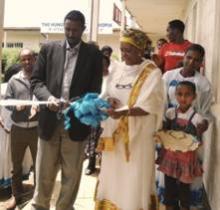 The Hunger Project-Ethiopia focused 2014’s International Women’s Day on gender equality in savings and credit as part of the UN’s theme of “equality for women is progress for all.” The day was celebrated with an inauguration of Fetan Lewet, the Machakel Epicenter Savings and Credit Cooperative (SACCO).

Machakel Epicenter was created in 2008 in the Amhara Region of Ethiopia. The epicenter SACCO was legalized in 2010 under three objectives: to promote a savings culture within the community, create a revolving loan fund and build capacity through various trainings. In 2013 alone, birr 747,500 was distributed in loans.

As part of the inauguration ceremony, SACCO Committee Members (100% women) who served the community and the best users of credit and leaders in saving and loan repayment (90% women) received certificates and gifts for their role in the success of the Savings and Credit Cooperative. The Amhara Regional Media (TV and Radio) recorded the event to air it over the week.

The speeches delivered by government officials, the SACCO representative and Hunger Project representative reflected the idea that The Hunger Project-Ethiopia has reached the community effectively and helped those who really need the support and assistance. Everyone felt the results are measurable and well appreciated by all. Event presentations expressed how women’s and girls’ education, credit/saving and other women’s empowerment programs contribute to the “women’s multiplier effect” on the country’s production, progress and development.

Also in honor of International Women’s Day and to encourage the community to save and obtain credit for development, loan partners and high school students prepared poems and drama to speak to the importance of saving to the community and the role of women in the development process.

It was noted at the event that despite their critical importance to food production and food security, the majority of women in Machakel, as in other regions of the country, endure conditions of economic and social marginalization. They continue to account for over 60% of the country’s hungry and the girls are less likely to attend school than boys. They have less access to credit, agricultural extension services and land ownership. They have little, if any, voice in decision-making. The disparity between what women do, and the resources they have, is staggering. Despite this widely accepted notion, rural financial programs have been largely designed, crafted and implemented with the male head of household as the intended client and fail to recognize that women are active, productive and engaged economic agents with their own financial needs and constraints. Women constitute approximately half of the rural labour force and contribute to national agricultural output and family food security, but they benefit from only 30% of the credit activities.

The Hunger Project-Ethiopia has developed a goal of establishing a community where women are more than 67% of the beneficiaries of the saving and credit opportunities. Community members have already seen a drastic change in the self-esteem, education and property ownership of women and girls in the area. Our partners at The Hunger Project-Ethiopia realize that this momentum has to be maintained until full success is achieved.