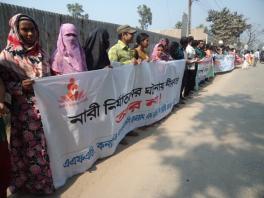 The Hunger Project-Bangladesh came together with the worldwide movement of One Billion Rising on February 14, 2013. In Bangladesh, Uddomey Uttoroney Shotokoti (One Billion Rising) is an alliance of rights groups, government and private sector institutions, students and activists that mobilized millions of women and men across the country to rise up, walk out and demand an end to violence against women. Bangladesh joined together alongside 200 other countries who gathered to demand an end to violence against women.

THP-Bangladesh mobilized several organizations and joined hands to form human chains in five areas of Bangladesh. Over 500 people participated, wearing red, chanting slogans and holding banners. Among the 350 participants standing near THP’s office in Dhaka were students from several educational institutions including Badrunnesa Women’s College, Lalmatia Women’s College and People’s University of Bangladesh. To express their demand for an end to violence against women, some of the slogans chanted included ‘No more silence’, ‘We demand a rape-free society’ and ‘May every place be safe for women’.

February 14 is not an end, but rather a starting point and a step forward for future discussions and action on violence against women. One Billion Rising member organizations will use this platform to consolidate and coordinate their efforts where possible and challenge discriminatory practices and laws through awareness-raising activities, training, outreach, advocacy etc.