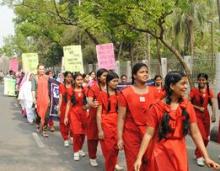 During this reporting period, THP-Bangladesh made great progress in ensuring good governance in the 80 Union Parishads (UPs) identified as priority Unions. Increasingly, program interventions are focused on transparency and accountability of UPs, and several UPs, with the support and guidance of THP and participation of Ward Action Teams, have for the first time ever drafted five-year strategic plans, mapping out clear goals for community development. Additionally for the first time, all 80 of the priority unions held planned Ward Shava meetings.

THP-Bangladesh has strengthened fruitful partnerships with the Australia High Commission, BRAC, the World Bank and the British Council, all of which forward its work to support rural people to achieve the Millennium Development Goals (MDGs) in their Unions, particularly through the development of good governance and women and youth leaders.

This reporting period there were several national-level meetings coordinated by THP-Bangladesh. National Girl Child Advocacy Day was celebrated, the 4th National Convention of the Unleashed Women Network, and the 15th National Youth Conference was also held for the first time in three years.